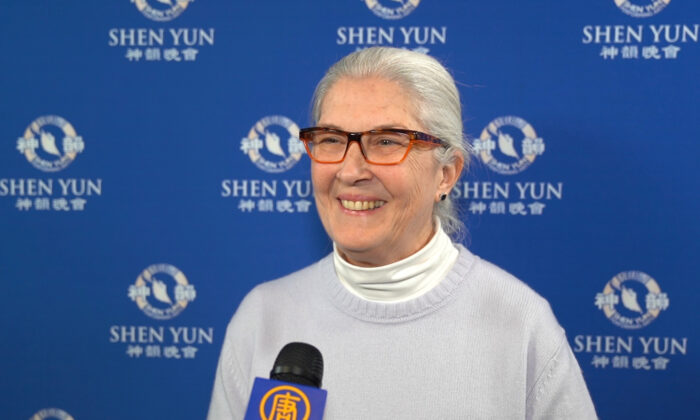 CHARLOTTE, N.C.—Gratitude and good fortune: that’s the feeling that great art leaves in us, the sense of being enriched, of having become better after seeing it. While many such transcendent artistic experiences are housed in places like the Louvre or Versailles, there is one based in New York that travels the world, delivering exactly that feeling to theatergoers like Paula Pottle of North Carolina, the senior vice president of a bank.

“I’m very lucky I got a chance to see this … and I think the mission is wonderful: to open this door to people who may not have seen or known anything about [true Chinese culture],” she added.

Shen Yun’s mission is to revive China’s 5,000 years of civilization through ancient and expressive art forms such as classical Chinese dance, bel canto singing, couture costumes, and more. But the most important aspect of traditional Chinese culture, found in Shen Yun, is its spiritual essence. Shen Yun’s roughly 20 short vignettes depict the divinely-inspired culture and even ancient legends about heavenly beings coming to earth and interacting with people.

For Pottle, Shen Yun was a cultural experience that offered delights for the senses and the soul.

“The colors, all of the colors of the costumes, it’s beautiful. And the ancient Chinese stories brought to life. It’s just wonderful,” she said.

“I think there is a lot to be learned from historical or ancient stories for sure, applicable today. I think some of the stories [in Shen Yun] tell you about how good conquers evil, that’s for sure. That would be one of the messages,” Pottle said.

“Follow your heart” is another such message Pottle drew from the performance, this time from a specific dance story about a Taoist master and disciple who took a leap of faith. “Very, very enjoyable and a wonderful story,” Pottle asserted.

Charlotte audience members were treated to a special solo performance in Shen Yun by erhu player Lu Sun. The piece she played is titled “Roaming Without a Care.” Pottle thoroughly enjoyed this rare opportunity.

“Oh, yes, that’s fantastic [the erhu], yes, that’s great. It was … you hear it, you recognize it, but I have never seen it played live, so it was wonderful,” she said.

According to Shen Yun’s website, “The erhu is incredibly expressive, capable of imitating sounds from chirping birds to neighing horses. … In its lowest and middle range, the erhu is especially stirring and somber, a quality eminently suitable for conveying the grand pageant of China’s history and the emotions of its people.”

Pottle’s overall impression is that Shen Yun was “visually elegant and the music is also wonderful.”

“I would absolutely recommend it and it’s a wonderful, wonderful performance. I enjoyed it,” she added.