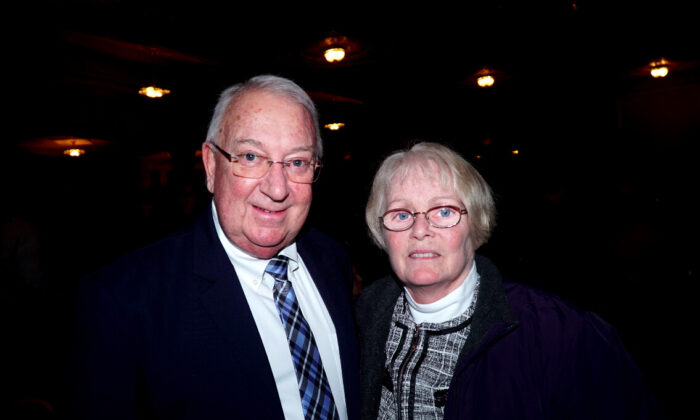 PHILADELPHIA—Age removes the pliability from our joints and the tautness from our skin, but it leaves something precious in its place: experience and wisdom. Jim Barnes is a bank manager who has the valuable experience to be able to compare today’s society with days gone by. The stories he saw in Shen Yun Performing Arts at the Merriam Theater in Philadelphia gave him hope that more people may think about morals in a way they don’t seem to anymore, which he feels would be a great thing.

“The costumes, they were so fluid. When you get older and you can’t move like that, you appreciate young people,” Barnes said about Shen Yun’s classical Chinese dancers when he attended the performance on Feb. 13, 2020.

New York-based Shen Yun is on a mission to revive China’s 5,000 years of traditional culture and share it with the world. As it turns out, true Chinese culture has an indispensable aspect to it without which, it would not be authentic Chinese culture—its spirituality and moral compass. Shen Yun continues the millennia-old tradition of handing down legends about heavenly beings, about the Creator who will one day return to earth, and stories of those who walk a spiritual path such as Buddhists, Daoists, and Falun Dafa practitioners.

Themes like loyalty, compassion, standing up to evil, and courage run through the roughly 20 short vignettes in a Shen Yun performance.

“It’s a, it’s kind of uplifting, isn’t it?” Barnes said. “It’s nice to know that there’s some moral and some things that go above what a lot of people think about. I think there’s more to the show than just dance and young people—there’s a message to be had.”

“The message I would get is there is hope,” he continued, “and there are moral things that maybe a lot of people don’t understand anymore, and maybe that’s something we can get from the show.”

Barnes went on to say that he certainly did find hope all throughout Shen Yun, as well as a positive overall message and energy from the songs’ lyrics and the dances. But that’s not all.

“Love the music,” Barnes said, “I’m a musician by trade as well so I was trained in music … The [Shen Yun] orchestra’s awesome. They do a great job—great job.”

Barnes plays piano and organ. He appreciated the unique instrumentation in Shen Yun’s live orchestra and heard instruments he said he may not have heard before. Shen Yun’s music is unique in the classical music world for the way it combines Western orchestration with select Chinese melodies and instruments, forming a sound that’s at once familiar to music fans around the world yet distinct and delightful.

“Yes, Western and Chinese as far as musicians, yes it’s great,” Barnes said. “Music’s great. It’s nice to hear the sounds of the instruments, too. Sounds like almost like string instruments that I’m not familiar with. But, yes, it’s really nice.”

According to the Shen Yun’s website, “The erhu,” one of the unique string instruments Barnes heard that’s featured in the performance, “is incredibly expressive, capable of imitating sounds from chirping birds to neighing horses. An alto instrument with a middle-high musical range, its melodies can be tender or sonorous. In its lowest and middle range, the erhu is especially stirring and somber, a quality eminently suitable for conveying the grand pageant of China’s history and the emotions of its people.”

The Truth About China

Even though it is a quintessentially Chinese experience, Shen Yun is not allowed to perform in China today due to a campaign by the Chinese Communist Party to destroy China’s traditional culture and spirituality.

This effort includes brutal persecution of spiritual believers and has been going on since the Cultural Revolution in the 1960s. Shen Yun depicts scenes from present-day China in which Falun Dafa practitioners, a group that’s been especially severely persecuted since 1999, face the violence with faith and inner perseverance. Shen Yun’s artists themselves practice Falun Dafa, an ancient meditation way that teaches truthfulness, compassion, and tolerance along with energy-strengthening exercises.

Barnes commented on the stories that depict persecution in Shen Yun.

“It seems to be that there is some thinking behind the entire Shen Yun movement, and I’m not familiar with a lot of the philosophy behind it, but it’s quite obvious that the [Chinese] communist government doesn’t want that to be brought forth. And it sounds like to me that the folks that feel that way very possibly may not be what the Communist government wants in terms of controlling the people. And you can have free thought and you can have hope, and maybe that’s part of what that all comes about,” he commented.

Barnes says he would certainly recommend that more people see Shen Yun. His life experience came to bear again when his recommendation included a word about how he as an American has never watched something like Shen Yun before.

“I would say that if you have a chance to see the show, it’s awesome to do that,” he said, “because there’s a chance to see some things that we within the United States haven’t seen before. And it’s uplifting and it certainly is something to enjoy.”

With reporting by Lily Sun and Brett Featherstone.