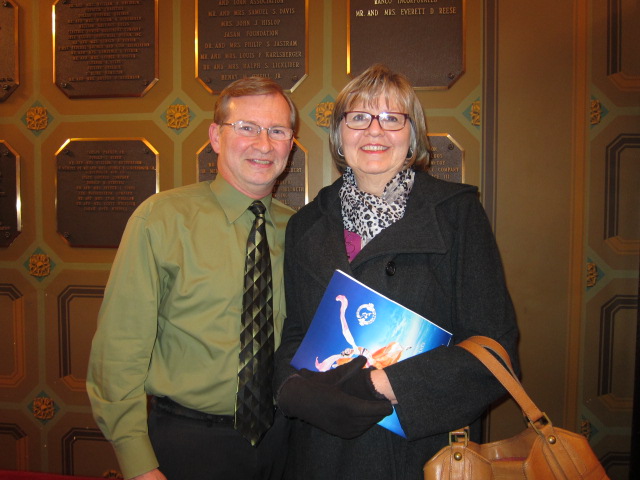 Band Director Says about Shen Yun ‘I’d recommend it highly, it’s not like anything we’ve seen!’

COLUMBUS, Ohio—Kent and Lauren Eastham joined the audience at the historic Ohio Theater, for the closing performance of the Shen Yun Performing Arts Touring Company, on April 16.

Mr. Eastham is a music teacher and the band director for Buckeye Valley High School. Mrs. Eastham works with Anthem Insurance Company as a program director.

“I had no idea what to expect. My wife was the one that was really the catalyst, decided we should be here. Mr. Eastham said, It’s great music, fabulous orchestra.”

He explains further: “I’d recommend it highly, it’s not like anything we’ve seen!”

Being well versed in music Mr. Eastham relished the unique sound produced by the blending of Western and Eastern instruments, which Shen Yun’s Symphony Orchestra delights people around the world with.

“That was a great sound, that was a great combination, pretty instinctive because we use different scale systems, obviously, and so to adapt the two together is pretty fun. I know it’s all original music, so that was also pretty interesting,” he explains.

“It was a great orchestra, it really was,” Mr. Eastham said.

Mrs. Eastham embraced every aspect of the performance, “Beautiful show, loved the dance, loved the colors, loved the costumes – it was just beautiful!”

The Shen Yun website says, “The Shen Yun Orchestra masterfully blends two of the world’s greatest classical music traditions. The Western orchestra with its energy and grandeur, and the Chinese instruments with their distinct tones and styles, create a dramatic new sound.”

“I get a chance to hear music performed at a really high level and don’t hear that every day. I hope my kids will go and hear something like this, so they can have the same experience,” he added.

The Shen Yun performance not only takes the audience on a magical journey through ancient realms, myths, and legends, it brings them tales of courage from present day China.

Mr. Eastham expressed his surprise, “I was not aware that their native culture wasn’t really allowed to be expressed. I know it’s (communist China) an oppressive society, but … this certainly made me more aware of that. It also made me happy to have the freedoms that we have here, artistic freedoms for sure.”

Shen Yun is a non-profit,”Based in New York, Shen Yun Performing Arts was established by Falun Dafa practitioners in 2006. The company’s mission is to use performing arts to revive the essence of Chinese culture—traditionally considered a divinely inspired civilization. Since the Chinese Communist Party is officially an atheist regime, it is afraid of the freedom of expression this arts company enjoys in the West,” says their website.

Voicing his concern Mr. Eastham said, “I think they’re missing out on their past, their history, and their culture. We got a chance to see it here, I know they’re aware of it, but obviously not to be able to share that is a shame.”

Shen Yun speaks to the hearts of people from every echelon of society, young and old, Mr. Eastham was amazed. “I’ll tell you what struck us about the show was the broad range of people we see here,” he said.  There was a really neat cross-section of people here in Columbus that were here tonight.”

In closing Mrs. Eastham said she was going to recommend others come to see Shen Yun when it comes back their region.”I would suggest this to anybody. Go see it. It was a great show.” she said.