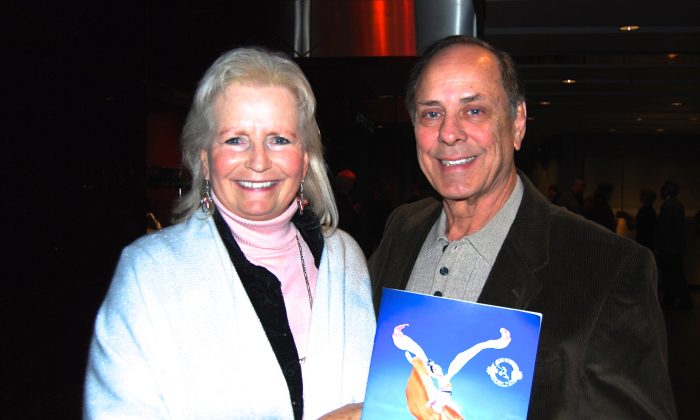 DALLAS—Professional ballroom dance instructor Linda Mariani was blown away by the grace and cultural significance of the classical Chinese dance she saw with Mr. Dennis Mitchell at Shen Yun Performing Arts at the Winspear Opera House in Dallas, Jan. 4.

“I was blown away. It’s truly a remarkable and amazing presentation,” Ms. Mariani said.

The traditional Chinese culture, said to be inspired by the heavens, came through in the performance by New York-based Shen Yun and was the highlight of Ms. Mariani’s evening.

Values like benevolence, wisdom and propriety, and respect for the heavens come from the teachings of Buddhism, Taoism, Confucianism, and make up the core of traditional Chinese culture. These principles were seen in the dance, the performers, and the stories Shen Yun told.

Ms. Mariani was delighted to see that Shen Yun was telling the story of China and showed her how the traditional values are present even today—for example, in the meditation discipline Falun Gong—and all the way from the inception of the first Chinese dynasty.

Shen Yun performs both classical Chinese dance, which is a richly expressive independent system of dance, and ethnic and folk dances from China’s many minority ethnic groups. Beyond the history Ms. Mariani learned, she was treated to scenes spanning across time and space in China.

“The different scenes that depicted Chinese life, the farm scenes, and the playfulness of the young male dancers, particularly,” she noted. “The grace and beauty of the female dancers, the way they move, is just amazing.”

The variety and expressiveness she saw in the performers was personally inspiring.

“It’s really quite amazing. It makes you want to just move more gracefully and slowly, and it makes you feel very peaceful,” she said.

“The show was exquisitely beautiful. The colors, the costuming was just so gorgeous, really a feast for the eyes is the best way to put it,” Ms. Mariani said.

Shen Yun uses hundreds of costume pieces in its all-new performance every season. Each one is a spectacle of brilliant color, presenting the audience the results of artistic inspiration, from court dress to celestial beings to the common individual.

Many of the costumes also include elements that are used similarly to props. For instance, the long, flowing “water sleeves” of the female dancers in a piece depicting the Han Dynasty were gentle and expressive—a window into the dancers’ inner world.

“There’s something very ethereal and very beautiful about that,” Ms. Mariani said.

Mr. Mitchell had greatly enjoyed the range of dance he saw as well.

“I found that very exhilarating,” Mr. Mitchell said of the combination of the use of the costumes, colors, and props. “Very lovely.”