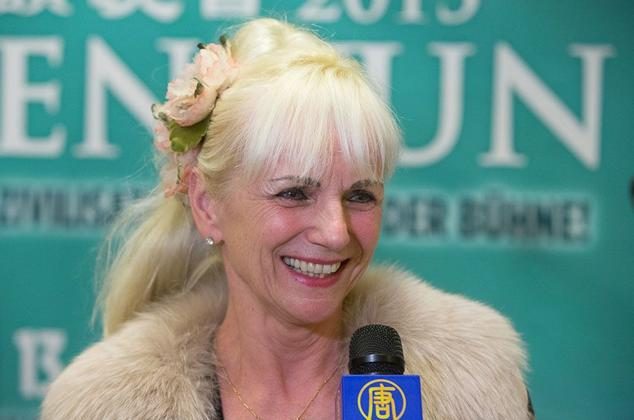 FRANKFURT—Ms. Dorothea Beug Katzenberg, head of a ballet school, talked six of her pupils into seeing the Shen Yun show, despite an almost one-and-half hour drive. She wants to bring even more people when Shen Yun visits in 2016. “This type of art makes people feel content and happy. The beauty of these performers, the perfect body control, and their efforts and accomplishments achieved a perfection rarely seen.”

Her students were inspired.

“We enjoyed every minute and my pupils asked me if they should also do some of the things we have seen tonight. I told them that although they would never achieve the artistic competence of the Shen Yun dancers, it is not always necessary to be the best,” she said.

Shen Yun performed in the Frankfurt Jahrhunderhalle, from March 13 though March 15.

Ms. Katzenberg said, “We were already enthusiastic before we even arrived at the Jahrhunderthalle because we wanted to learn about a different dance technique, one that is highly artistic.”

According to Shen Yun, classical Chinese dance is “an art form tempered over thousands of years … Chinese dance is at the heart of what Shen Yun does. Known for its incredible flips and spins, and its gentle elegance, it is one of the most rigorous and expressive art forms in the world.”

According to Shen Yun, its “stunning beauty and tremendous energy leave audiences uplifted and inspired.”

Ms. Katzenberg experienced the energy emitted by the Shen Yun performers and said, “This was an exceptional evening. I feel refreshed and relaxed.”

The performance acted as a tonic. “Shen Yun relieves every day stress, it brings endless happiness to its audiences and makes one feel happy not just during the performance, but for a long time to come. It fires up my imagination and allows me to turn into a better teacher.”

After seeing Shen Yun, she felt inspired to try to bring the best out in her students. “It doesn’t matter if the person doesn’t attend my class more than once a week. If I can help them improve to just do better, I will feel gratified.”

The ballerina said she felt grateful. “It was a wonderful evening. Now, I leave in a happy mood and fully relaxed and am certain I will retain this feeling when I meet with my students.”

She hoped to “give my kind regards to the Shen Yun performers and the musicians. We want to convey to them our deepest thanks. We are very appreciative of what we have seen tonight,” she said.

Reporting by Alexander Hamrle, NTD Television and Heide B. Malhotra