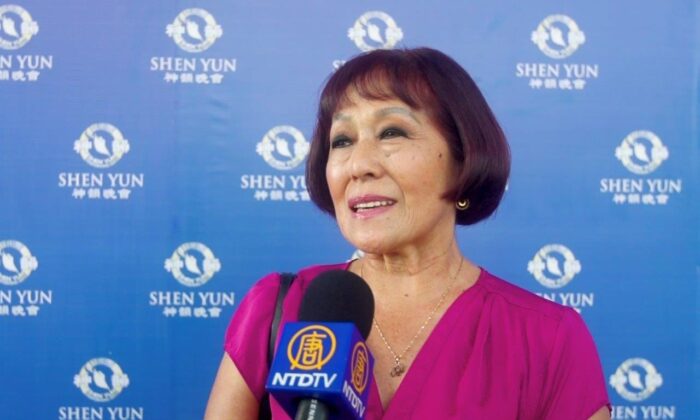 LIMA, Peru—Olga Shimasaky knows very well what makes for a great dance performance. As the artistic coordinator of the National Ballet of Peru and has been the director of the company for 26 years, Shimasaky understands dance.

At the Gran Teatro Nacional in Lima, Peru, on Feb. 9, 2020, Shimasaky had the opportunity to see New York-based Shen Yun Performing Arts and took in the classical Chinese dance performance. In it, she found a revival.

“It’s a very interesting history; we should also preserve our stories as they do,” Shimasaky said. Shen Yun’s mission is to revive the 5,000 years of Chinese civilization that has been nearly wiped out by the ruling communist regime since several decades ago, and this story behind Shen Yun had taken hold in Shimasaky’s heart.

She congratulated Shen Yun on their mission and success and thanked the artists for sharing the beauty of a divinely inspired culture. And for the dancers, she had heartfelt praise.

“The movement comes from here, from the spirit, from the coordination, from the mind and above all from the dedication that each one has,” Shimasaky said.

Shimasaky added that all of the production elements, from choreography to music to animation, were beautiful and played a role in the performance coming together, but it was the hearts and souls of the artists that made a difference.

It could have been a cold performance, she said, even with the spectacle, but it was not.

Not only smiling and moving with the music, but I really feel that the movements they want to perform are coming out from their souls.
— Olga Shimasaky

“Not only smiling and moving with the music, but I really feel that the movements they want to perform are coming out from their souls,” she said. “I feel pleased.”

“I am very happy, and once again, I congratulate the group,” she said. “I appreciate it and keep cultivating this art that is very important, do not stop.”