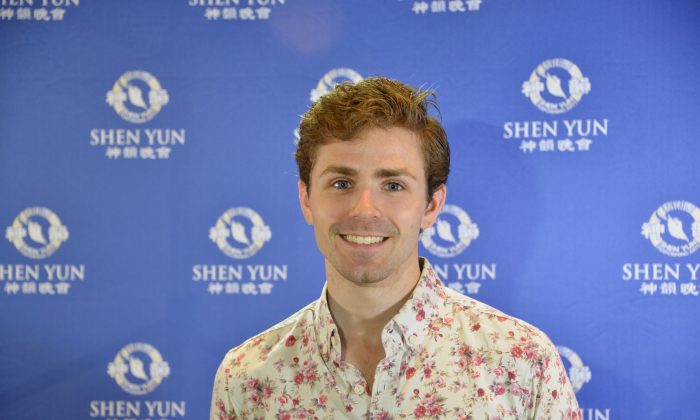 Max Hopper was so inspired by the beauty of Shen Yun he felt he wanted to dance right along with them, at Wellington's St. James Theatre, on Feb. 16, 2016. (Courtesy of NTD Television)

WELLINGTON, New Zealand—Throughout the Shen Yun Performing Arts, dancer Mac Hopper was tempted to leap onto the stage with the Shen Yun dancers as he was so immersed in the production. “It transports you into a different world,” he said. “You feel like you’re right there on stage with them, dancing around in their formations.”

Mr. Hopper’s began dancing at age nine in Virginia, U.S.A., and he joined the Royal NZ Ballet in 2012. In 2015 he appeared as Cupid in “Don Quixote.” Mr. Hopper attended with Ms. Laura Jones, who began dancing at age six in Sydney, Australia. Ms. Jones joined the Royal New Zealand Ballet in 2013. Also appearing in “Don Quixote,” she played Queen of the Dryads.

The degree of skill displayed by the Shen Yun dancers, especially their range of movement and strength, impressed Ms. Jones. “[It’s] very acrobatic and very technically challenging, which I thought was spectacular,” she said.

Classical Chinese dance was developed and refined over thousands of years until it reached the level of technical mastery evident in a Shen Yun performance today. The technical skill required refers to a series of highly difficult movements, including jumping and leaping, turning, and flipping.

It was a form completely new for Ms. Jones, and she enjoyed playing audience to such skilled dancers. “It was a new experience for me,” she said, adding that she adored the cultural difference of the dance style. “It was very classic, very beautiful.”

Aware of all facets of a performance, including what goes on back stage, Ms. Jones said, “Oh my goodness. Those costume changes were so fast!” She was impressed not only by the performers who appear as undersea fairies in one dance, and reappearing donning the garb of ethnic Mongolians minutes later, but also with how the beautiful costumes were utilized in dance. “The actual interaction with the costumes was beautiful,” she said.

The detail in the performance impressed Mr. Hopper. “Every little thing, even the story-telling things; everybody went 100 percent, 150 percent—as an audience member that’s what you need.”

Mr. Hopper’s close proximity to the live orchestra amplified his immersion in the performance. “[The] music is right there. I didn’t expect live music, so that was a great surprise,” he said.

Shen Yun’s orchestra is unique in that its basis is Western with ancient Chinese instruments, including the erhu and pipa, which increases the expressive range of the ensemble, producing everything from delicate melodies to intense battle sounds.

In appreciation of the high skill level reached by the Shen Yun performers, Ms. Jones thanked them, saying “they’re doing a stellar job” transforming their beauty and technique on stage. She felt they were really enjoying themselves.

Ms. Jones described the effect of Shen Yun on her as “overwhelming with colour, with excitement, and spectacular.”