Ballet Dancer: ‘Everything was just brilliant’ 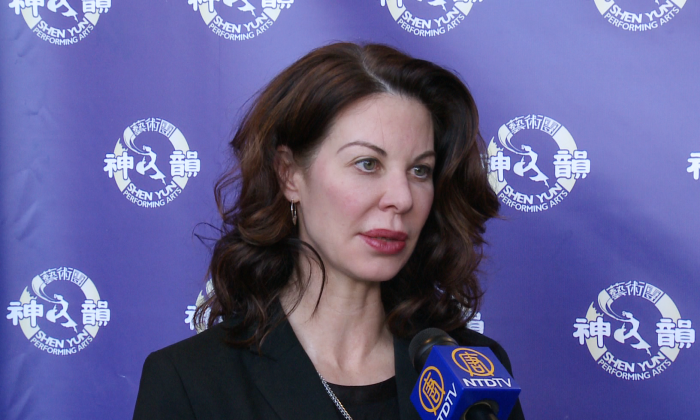 Former national ballet dancer Katherine Latcham was impressed by the precision and professionalism of Shen Yun's performers Saturday afternoon at the Living Arts Centre in Mississauga. (Courtesy of NTD Television)

MISSISSAUGA, Canada—As a former dancer with the National Ballet of Canada, Katherine Latcham appreciated the grace and beauty of the dance pieces presented by Shen Yun Performing Arts Saturday at the Living Arts Centre in Mississauga.

“It was an absolutely exquisite performance, the lines were so clean, the dancers so focused, the costumes very authentic historically, the music was just brilliant. We were so very impressed and just grateful to be here to see this performance,” she said.

Shen Yun was founded on a mission to revive 5,000 years of divinely inspired Chinese culture through the performing arts. Drawing on that rich heritage, Shen Yun performs classical Chinese dance as well as ethnic and folk dances. Many dances are mini-dramas that depict myths, legends, and contemporary tales.

“It was just beautiful, the rhythm, everything was perfect. It was just such an experience, so delightful,” she said.

She said the Shen Yun dancers had clean lines and were very focused.

“The symmetry was right on, it was spot on, it was perfect—everything was just brilliant.”

Attending the show with Ms. Latcham were her husband and children who all said they enjoyed the show. Speaking for her family, Ms. Latcham said, “Incredible, the girls were mesmerized,” adding that her son loved the drumming.

Commenting on the several dances in which both male and female dancers whirled and fanned long ribbon-like sleeves while dancing, she said, “I can’t even imagine dancing with long sleeves.”

Those sleeves, called water sleeves, extend and accentuate each movement of the dancers’ arms and linger in the air after the movement is finished.

Ms. Latcham also noted the ability of the dancers to jump very high and yet soundlessly land back on the stage. “It was perfectly quiet.”

Ms. Latcham said she and her family were looking forward to seeing the show again next year. Each season Shen Yun presents all new music and dance, which brings many back to see the performance year after year.

“It was a lovely experience.”

With reporting by NTD Television and Pam McLennan