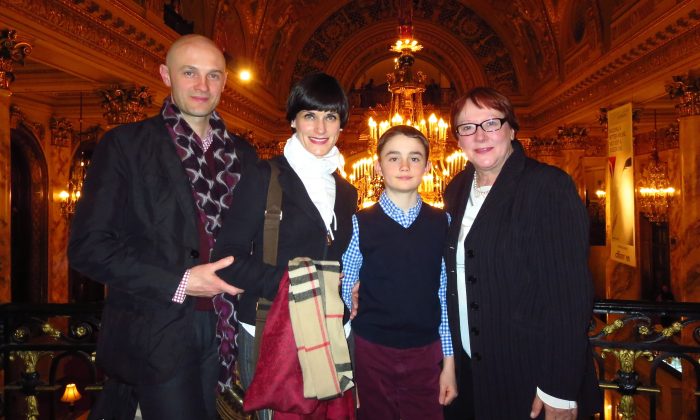 BOSTON—After more than a decade of dancing and teaching ballet, Alexandra Koltun knows that the art of dancing requires discipline, dedication, and passion. She saw all three of these virtues at Shen Yun Performing Arts in Boston on Saturday, March 1.

“We could relate to the discipline, because in any kind of dance to achieve your goal you have to have the discipline and passion. You have to love it,” Ms. Koltun, a professional dancer who founded the Koltun Ballet Academy, said about the dancers. “They are all dedicated to serious work.”

Ms. Koltun received her dance education in Russia and defected to the United States from the Kirov Ballet in 1991. She was a principal dancer at the Boston Ballet and with Deutsche Opera am Rhein Düsseldorf. Ms. Koltun also performed with the San Francisco Ballet, Dallas Fort Worth Ballet, Ballet San Jose in California, and toured with the International Ballet Stars Gala.

Ms. Koltun saw Shen Yun at Citi Wang Theatre with her husband and two children, who were also impressed by the performance. Shen Yun is the world’s premier classical Chinese dance and music company based in New York.

“I think it is a good mixture between the culture and dance, and the singing,” said Alex Lapshin, Ms. Koltun’s husband, co-founder of the Koltun Ballet Academy, and a professional dancer.

Shen Yun’s vocal performances feature all original scores and lyrics. The songs are unique because the lyrics are in Chinese, while the singing style is the classical “bel canto.”

“This means that the singer must, while continuing to meet the challenges inherent in bel canto technique, retain proper Chinese pronunciation and diction,” the Shen Yun website states. “Today, these singers’ ability to do this is unparalleled.”

“I liked the girls with the flowers and I loved how they had the beautiful silk dresses,” said Ms. Koltun. “I loved that.”

Koltun’s son, Anthony, is taking martial arts classes. He particularly liked a Shen Yun dance called Ne Zha Churns the Sea, which features an epic battle between a boy with magic powers and a menacing dragon from the ocean’s depths.

“My favorite part was the dragon one,” Anthony said. “It was under water and there was the person with the ring and he saved the town.”

Shen Yun uses digital backdrops to transport audiences to realms both magical and real. In the case of Ne Zha, the dance Anthony liked, the backdrop is used to bring the audience to an underwater world.