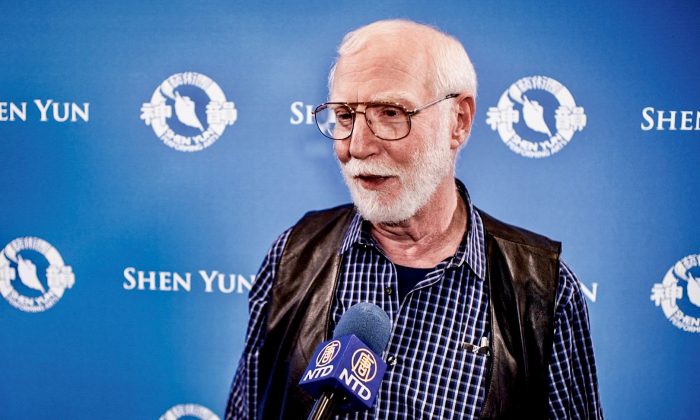 PHOENIX—Award-winning writer and book author Alan Korwin decided to go see Shen Yun Performance Arts after his 98-year-old father recommended the production. Korwin went in thinking Shen Yun was just another dance show—as described by his father—but he left the theater feeling enlightened and touched by the production’s message.

“The stories were very emotional. I’d have to see it again to absorb it all. I will be talking about it for months. Well, it was about the divinity within each of us, how humans are an expression of the divine, and the show was a divine presentation,” Korwin said. “It was beautiful! I feel it now. I am going to go home on a cloud of air.”

Apart from writing, Korwin also runs a publishing business that has become the largest publisher and distributor of gun-law books in the United States. He has written business and strategic plans for large companies and is also a columnist for The Daily Caller and Townhall.

The 69-year-old saw Shen Yun at the Orpheum Theater with family in Phoenix during the matinee on Feb. 23. He said there were parts of the performance that moved him to tears.

“They are consummate performers—the acrobatics, the dancing, the leaps, the way they work with each other, words can’t describe it. When you see it, it just fills you with awe. It moved me to tears in places. It was wonderful,” Korwin said.

New York-based Shen Yun is in the midst of its 2019 tour where it will perform in over 100 cities, with a mission to revive China’s 5,000 years of semi-divine culture that was destroyed after the Chinese Communist Party (CCP) seized power.

“I have been warning my friends that [the Chinese regime] is really communist—it’s evil. And Shen Yun is expressing that in dance and song and trying to get the message out to Americans because that message is not getting out in the way it needs to. Communist China is an accurate expression, [while just calling it] China is a misdirection. Shen Yun is the real China,” the writer said.

“This is the 5000-year worth of beauty of China, and it’s being suppressed.”

Portraying a Real Picture of China

Many Shen Yun’s audience members are surprised when they hear from the emcees that Shen Yun cannot perform in China today.

Little does the audience know, the CCP sees traditional Chinese culture, which is deeply rooted in Buddhism, Taoism, and Confucianism, as its greatest rival.

Korwin thinks Shen Yun’s message is so important that it needs to reach more people.

“Unfortunately, very few people see it. The theater holds just a few hundred people. Millions of people need to get this message. I wish [Shen Yun] had a videotape. I would have brought several and played it for my friends,” he said.

Over the past several decades, China has experienced many movements aimed at wiping out 5,000 years of civilization and traditional culture.

One of these movements was the Cultural Revolution, which occurred between 1966 and 1976. It was an unprecedented move to systematically eradicate traditional culture and replace it with Mao Zedong’s way of thinking and style of discourse, as Shen Yun explained on its website.

Seeing that genuine Chinese culture was at its brink of being wiped out, a group of artists was determined to bring back everything that truly defined the Chinese people. This was how Shen Yun was born.

Today, it has become a window into a cultural treasure that is nearly lost.

These are things the CCP has tried to hide, and Korwin liked how Shen Yun portrayed the persecution and highlighted the fact that the performance cannot be shown in China.

“Here, the media doesn’t give you an inkling of that. They keep saying China, they never say communist China. [The CCP members] are an enemy of ours but they present them as a trading partner—no big deal. That is a deception and [Shen Yun] unveiled the deception,” he said.  He felt Shen Yun tells the truth about China’s traditions, and how the communist regime treats people who want to follow the real culture.

‘Brought me to tears’

These stories portray themes like spiritual devotion, the benevolence of gods, good and evil retribution, and the search for the meaning of life, according to the company’s website. Such values are foundational to traditional Chinese culture and are not political in nature. Instead, they encourage audience members to reflect on modern society and the world around them.

The 69-year-old said he was moved to tears by one of these stories, in particular, the piece “The Final Moment,” saying that it had a powerful impact on him.

It was a story of good versus evil, with a triumphal finale. Korwin described the evil that was shown, and “what beauty they were trying to use to defeat that evil.”

“That brought me to tears, that was a very powerful part of the show,” he said.