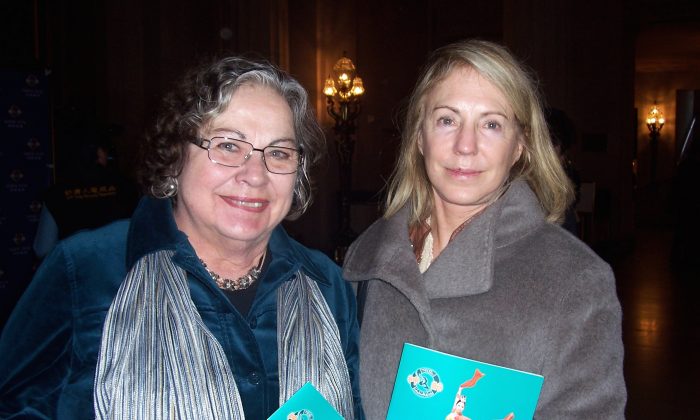 Ms. Levin was so touched by Shen Yun’s message of compassion that she wanted to share a wish for the Chinese people.

“We hope China thrives,” Ms. Levin said. “We’d like to see the country get back to the original Chinese culture.”

“I’ve been to China,” Ms. Kellicutt added. “And I wish [Shen Yun] could be performed in China. Absolutely!”

“China is such a beautiful country with beautiful people,” said Ms. Levin. “We in America really know nothing about it. Not the original China.”

The Shen Yun website says: “Forcing atheism upon society, the Chinese Communist Party has for decades launched various campaigns—most notably the Cultural Revolution—to destroy not only cultural sites, temples, and relics, but also the Chinese people’s belief in virtue and faith in the divine.”

Surveying the ornate décor of the grand War Memorial Opera House, the two felt fortunate to be among the audience during Shen Yun’s final 2015 performance in San Francisco.

“I finally came, and it was well worth it. I highly recommend it,” Ms. Levin said. “It was fabulous!”

Ms. Levin and Ms. Kellicutt offered words that they felt described the performance.

“Serene, calm, beauty, grace,” said Ms. Levin. And most of all, “compassion” and “humanity.”

Ms. Levin was also moved by the stirring lyrics of the soprano soloists.

They were also impressed by the dance pieces.

“The precision was amazing,” Ms. Levin said. “The beauty and the costumes, well-thought-out. The colors. The storylines—it was beautiful! We’re very lucky!”

“I wish them luck and I hope they do it,” Ms. Levin said.