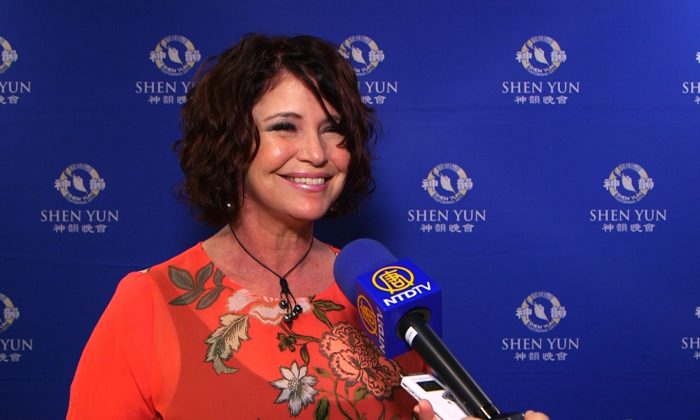 SAN DIEGO, Calif.—”It’s the most magical, amazing performance I’ve ever seen. It’s incredible,” gushed Sheri Liebert during an intermission after seeing the first half of Shen Yun Performing Arts at the San Diego Civic Theatre on March 25, 2016.

Ms. Liebert is an award-winning jewelry designer who is best known for her bold, contemporary-yet-timeless elegant pieces. Her pieces have been featured on such television shows as Dr. Phil, Oprah Winfrey Network, and American Idol, and graced the bodies of celebrities such as Oscar-winning Charlize Theron, Sandra Bullock, Kevin Costner, and Molly Ringwald, as well as Grammy-winning musicians Melissa Ethridge, Bonnie Raitt, James Taylor, Jennifer Lopez, Alanis Morissette, and Marc Cohn.

Ms. Liebert is also a philanthropist who is passionate about giving back to the community. She is a donor and supporter of the Make-A-Wish Foundation, Big Brothers Big Sisters, Voices for Children, and Home of the Guiding Hands.

“It’s the most incredible performance. I’m very inspired by the dancing, the performance, the colors, and the beauty of it,” she said. “It’s just inspiring, and hopeful for the world.”

I feel as if it brings all of our people together with love, hope, and inspiration.
— Sheri Liebert

Traditional Chinese culture was deeply spiritual. It was influenced by Buddhism, Taoism, and Confucianism, and was based on the harmony between heaven, earth, and humankind. Yet under communist rule, this traditional culture has been nearly destroyed.

In 2006, a group of distinguished classical Chinese artists from around the world founded Shen Yun Performing Arts in New York with a mission to revive traditional Chinese culture through music and dance.

Ms. Liebert was inspired by the expressive qualities of classical Chinese dance used to depict epic stories from ancient China all the way to the present, showcasing China’s imperial dynasties, as well as the many different ethnic groups in China.

The virtues and principles from China’s divinely inspired culture she saw in the performance, brought happiness and hope to her.

“I feel the world is so beautiful. I feel as if it brings all of our people together with love, hope, and inspiration. It brings hopes and happiness,” Ms. Liebert said. It brings her hope that, in the future, “we can have peace.”

All aspects of the performance delighted Ms. Liebert. Particularly, as a jewelry designer, she was deeply inspired by the brilliant colors of the over 400 beautiful, hand-made costumes. “It’s incredible. I have the colors running in my head. [I am] already wanting to go home and create jewelry,” she said. “[It’s the] most beautiful show I’ve ever seen.”

Thoroughly enthralled and inspired by the performance, Ms. Liebert expressed her heartfelt appreciation to Shen Yun performers several times. “I just want to thank the performers and the production. Everything they’ve done is perfect. I love it,” she said. “Thank you so much. It’s been a perfect night. With my mother and my husband, we really appreciate the performance. Thank you. It’s great art.”

Similar to other theatergoers touched by Shen Yun, Ms. Liebert was eager to share her experience with others as well. “Absolutely. I’ll recommend my friends to come. If they missed it, it would be unfortunate,” she said.