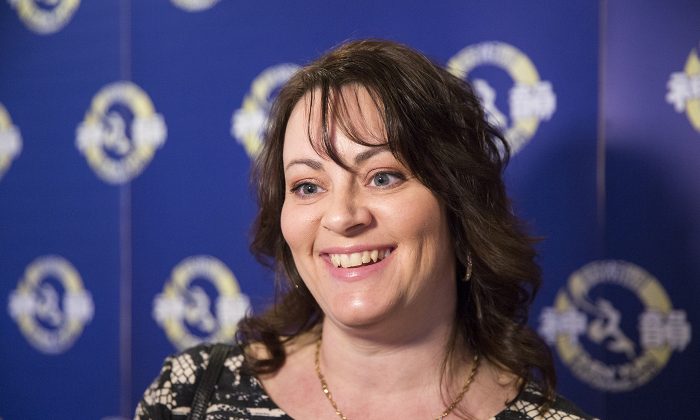 TORONTO—Irene Widdup is a dance evangelist, her life a mission to spread the joy of dance. It’s a passion that has earned her a long list of accomplishments and made her an influential member of Canada’s dance community.

Mrs. Widdup is president of the Alberta Dance Educators Association, owner and artistic director of a dance academy in Alberta, and an accomplished dancer and choreographer.

Her husband, Grant Widdup, likely knows her passion for dance better than anyone. That might explain why he flew her to Toronto all the way from Edmonton to see Shen Yun Performing Arts Thursday evening at the Sony Centre.

“My wife had wanted to see the Shen Yun show and so for Christmas I got her tickets and we made arrangements to come out to Toronto to attend the show,” he said.

To see the synchronization, just the detail and the 100 percent commitment from each dancer was amazing.
— Irene Widdup

Mrs. Widdup shared her thoughts on the performance during the intermission.

“We are very much enjoying the show. It’s been wonderful to watch, and I’m actually a dancer myself and artist myself, and I’ve really appreciated the artistry, the choreography, the colours, all the dancing.”

“It’s been wonderful and I love all the little stories and the explanation of each dance as it goes along. So it’s been phenomenal. It’s an excellent production.”

She’d seen Shen Yun before in Edmonton and loved it so much that she has been involved with a committee of people working to bring the performance back to Alberta.

Shen Yun was unable to perform there after two provincially owned theatres instituted a policy to require a net over the orchestra pit. Shen Yun said that net makes it difficult for the orchestra to properly synchronize with the dancers and the digitally projected backdrop.

As If ‘Floating Across’ the Stage

“We’re truly enjoying the performance. It’s been a wonderful experience. It’s good to see all of the different cultural aspects of China,” Mrs. Widdup said.

“I am fascinated by the way they walk across the stage. It just looks like they are floating across,” she said.

In classical Chinese dance, the female dancers move with a rapid heel-to-toe mini-step, appearing as if they are gliding across the stage. “The movement is so quick and smooth that it makes the dancers seem as if floating on a cloud,” explains the Shen Yun website.

“It’s very interesting to see the civilization of China and how it’s progressed in the different fables.”

She said it was important to share China’s long historical culture.

Shen Yun was founded on a mission to revive 5,000 years of divinely inspired Chinese civilization. It is a cultural heritage rooted in China’s three religions of Confucianism, Buddhism, and Daoism, and the values carried down through the generations through those traditions.

The values brought forward in the performance are important, Mrs. Widdup said.

“They were talking about compassion, and truth, forbearance—those kinds of values we don’t see in our society today.”

“I think it’s difficult for parents to raise their children in a society today, and I think shows like this show that values are of worth—and it’s very important to keep those values at all times so we can also raise our own children to grow up and be good citizens and be educated.”

Gaining a better understanding of Chinese civilization through the performance was also beneficial, she said.

“I think it’s important because everyone should learn the traditions and cultures, and it’s such a beautiful culture. We should all share and integrate with one another and understand the importance of the stories and fables that are being told. I believe that it really is within all of us.”

Mrs. Widdup understands well the dedication it takes to stage a performance of Shen Yun’s calibre. She has trained with top teachers from the Royal Academy of Dance from London, England, and has also trained dancers who have been accepted into Canada’s National Ballet School, as well as students who have become professional dancers all over the world.

She has won choreography awards and choreographed for events such as the 2001 Special Olympics World Games. She also performed with the Alberta Ballet at the opening ceremonies of the Calgary Olympics in 1988.

These days, dance education is a priority for her, and helping others teach dance. She’s created educational dance materials that have sold worldwide and published a teacher training program called S.T.E.P. (Student Teacher Education Program) to help dance schools train their dancers. Her expertise has seen her invited to many conventions to share her curriculum and innovative style of teaching.

One of the aspects of the performance that stood out to her was how well the large group of dancers performed together.

“Being so unified together—they were amazing. To see the synchronization, just the detail and the 100 percent commitment from each dancer was amazing. Yes, a very high standard quality. It was amazing.”

“The music was phenomenal. Being a choreographer myself I had wonderful ideas running through my own head of what I could choreograph. The orchestra was very, very good and the colours of the costumes were so vibrant and energetic. It was beautiful, very exciting to watch. And I especially loved the backdrop and the synchronization of the computerization with the live music and the dancers all together. It was lovely to watch.”

That computerization is Shen Yun’s digitally projected backdrop, which provides vividly animated settings for each dance.

“I’m really hoping that we can bring back this wonderful production back to Western Canada,” she said.