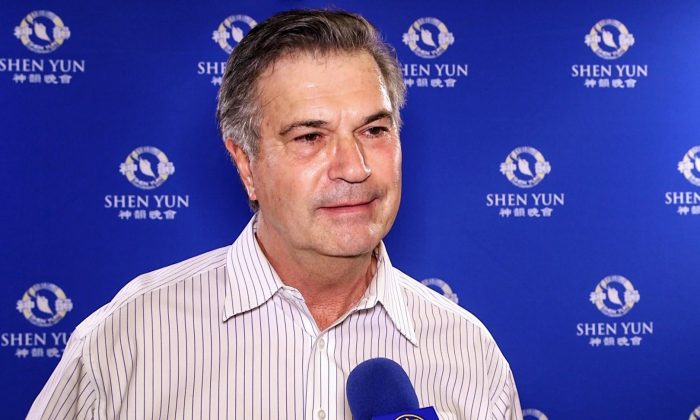 Dr. Steve Portz was voted #1 Cardiologist in Las Vegas by SEVEN Magazine, and the recipient of the Arnold Matera Award for Excellence in Radiology. He enjoyed the Shen Yun performance with his family at The Smith Center for the Performing Arts in Las Vegas, Nev., on March 9, 2018. (Yin Yang Chang/NTD Television)

“It was awesome. Everything that we hoped it would be. Very colorful, the dancing was incredible, the music was awesome. The backgrounds were amazing. We really enjoyed the whole show.”

“I was glad we got to share it with our whole family. It was a lot of fun.”

“The dancers, I wish I could fly like they do, up in the air. The way they bounce, the height that they get in their dancing, their agility and flexibility is really something to see.”

“The music was just really, really neat to hear—very beautiful. … Especially the erhu. It sounds like ancient Chinese music, and has a very unique and a very beautiful sound to it. It’s very hard to describe. They said it’s the closest sound to human voice, and sometimes it really is when you listen to it, and the music played was very pretty. I was thinking when listening to it, ‘I can listen to that for a long time.’ Very relaxing, very peaceful.”