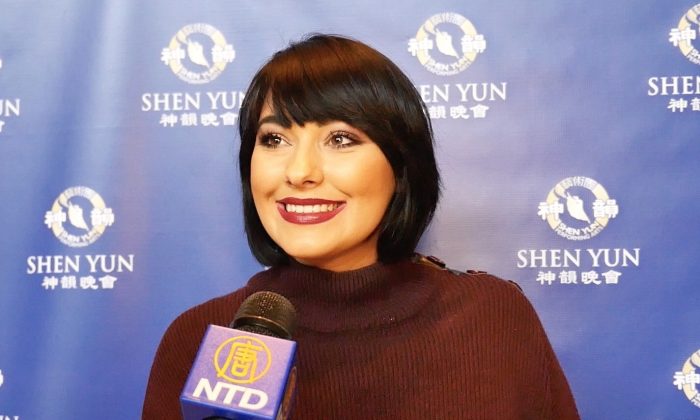 HOUSTON—”You can see in their facial expression and the way they move how much this means to them,” said Amanda Bradford, a professional ballroom dancer, after watching Shen Yun Performing Arts at the Houston Jones Hall for the Performing Arts on Dec. 26.

For Ms. Bradford, the passion and the devotion of the Shen Yun performers shined through. “Emotionally, [Shen Yun] is a wonderful thing to see,” she said.

Ms. Bradford, a professional ballroom dancer and senior instructor at Fred Astaire Dance Studio Pearland, started dancing from a young age, gaining experience in many different forms of dance. She has won titles at several competitions worldwide, including at the National Dance competition in Orlando and the Astaire World Championships Competition in Puerto Rico.

After seeing Shen Yun, she praised the show saying, “It is very visually stimulating.” In particular, she loved the exquisite and vibrant costumes. “The costuming is my favorite part. It accentuates the dancing so much,” she said.

Shen Yun, a New-York based performing arts company, seeks to revive divinely-inspired Chinese classical culture through an artistic showcase of music and dance and bring this lost heritage to the world stage.

Part of this heritage is Chinese traditional costumes. Shen Yun’s costume designers meticulously study the designs of traditional attire to create hundreds of authentic new costumes every season, according to their website.

As a dancer herself, Ms. Bradford recognized the dedication of the Shen Yun performers. “You can just tell the discipline and the hours that they put into it,” she said. She also praised them for perfectly coordinating and harmonizing throughout the performance.

“Particularly with the choreography, when you look at the formation, they are very well put together. Everybody is on the exact same timing,” she said.

I really think that the formations, the visuals, and the costuming are so much more elaborate and detailed than those of any other form of dance.
— Amanda Bradford

For Ms. Bradford, the many elements of the show added up to an extraordinary experience.

“Just beautiful,” she said. “I really think that the formations, the visuals, and the costuming are so much more elaborate and detailed than those of any other form of dance.”