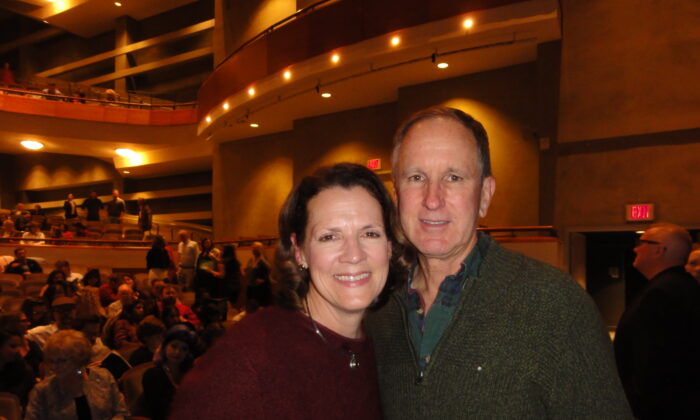 AUSTIN, Texas—Whether or not we make our living through our chosen art form, artistic practices can make our life feel more whole and meaningful. For Steve Burton and Kim Lee, a retired supervisor with the Dallas County government, and a Texas State University professor of health administrator, respectively, their artistic sides helped them appreciate one totally unique classical Chinese dance company they saw in Austin, Texas: Shen Yun Performing Arts.

“I used to be a [ballet] dancer, so when I see the women [dancers in Shen Yun] who were able to extend their legs and they are all in synchronization, it’s just beautiful. They are very strong and elegant. And just all move so very gracefully. Very beautiful. The dancing was beautiful,” Lee said at the Long Center for the Performing Arts during the Feb. 1, 2020, evening performance.

“I’m also an artist,” Burton chimed in. “I do pottery and a little music. We love art. Both of us are fairly artistic in a way.”

“The dance part [of Shen Yun] is beautiful,” he continued, “the flowing of the dance, very beautiful—makes you feel good. The men are really good. They seem kind of powerful. I like the story behind it, the spiritual story behind it all, that the communist Chinese kind of stifle the traditional Chinese dances, and we kind of like the spiritual part of it too, the story. It’s good.”

New York-based Shen Yun’s mission is to revive the 5,000 years of China’s deeply spiritual traditional culture, which includes legends of divine beings walking the earth, and the belief that one day the Creator will return for all mankind. Shen Yun’s roughly 20 short vignettes include depictions of these heavenly beings interacting with people in ancient times and in modern life.

Burton enjoyed this aspect of the performance and elaborated on it at length.

“I really like [Shen Yun’s spirituality],” he said. “It’s very impressive, kind of tells the story of the spirituality of the world. I think it’s portrayed very beautifully. That’s one of my favorite parts about it. I didn’t know there is going to be a story involved. Through the story, I think it’s a very beautiful way to portray the dance. Gives a lot more meaning to it, feeling to it.”

“For us, we are Christians,” he continued. “We are seeing [in the number about the Creator]—see a higher power coming down and controlling the earth and man responding to that. But it’s something easy to relate to.”

Burton’s words inspired Lee to share her views on the matter. “Sometimes I always think that, depending on where we live in the world, that we all believe in a higher power, but because of our culture, we all may see it a little different, but it may be the same, ultimate power. So I think that’s very beautiful that that dance is part of that,” she said.

“You can’t show [Shen Yun] in China … They are banned. You can’t show this beautiful show in China,” Burton lamented, responding to something the evening’s emcees said, which is that Shen Yun is not allowed to perform in China due to the fact that the Chinese Communist Party has tried to wipe out China’s authentic spiritual culture for decades and replace it with its own atheist culture.

Burton and Lee appreciated that they could see this show in the United States, and, using their artistic sensibilities, described the many aspects of it they enjoyed.

“The scenery, the digital scenery in the back was beautiful,” Lee said. “I also love their expression on their faces. So much expression. Each one of them is similar, but they also have unique personalities. Because I used to be a dancer—I haven’t danced in a long time—it makes me want to go dance … [Shen Yun] makes me feel very happy and joyful.”

“It’s got a romance to it,” Burton added. “That’s part of [Shen Yun]. It’s beautiful also, something romantic, part of it.”

Shen Yun translates from Chinese into English as “the beauty of divine beings dancing.” Burton said he and Lee felt that beauty while watching the performance, and likened it to a “flow.”

“[Shen Yun has] got a spiritual feel to it. When they explain what it was, it’s kind of divine expression through man or something. There’s a kind of real spiritual flow. We are all about the flow of spirituality. We are feeling it, we’re feeling that flow when we watch the dance show.”