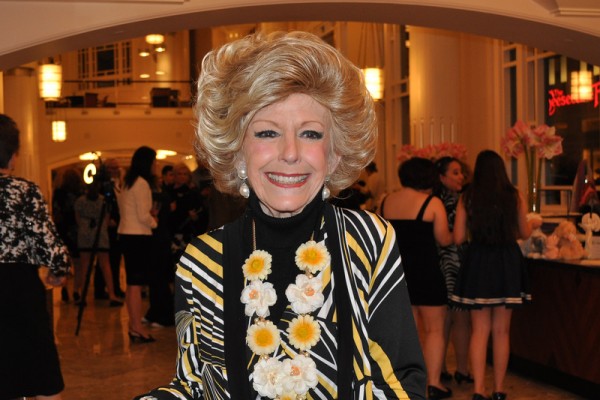 Mary Rutledge said Shen Yun was the most spectacular performance she had seen in her life. (Amy Hu/Epoch Times)

FORT WORTH, Texas—Mary Rutledge has traveled the world as a flight attendant and is a frequent attendee at Bass Hall. On Monday evening, she brought her adopted daughter Chelsea Horne and Johnny Greene with her to see Shen Yun Performing Arts, and said, with emphasis, that it was the “best show I’ve see in my entire life.”

“Absolutely spectacular,” said Ms. Rutledge, who, at age 74, is one of the nation’s oldest flight attendants (but “I can run circles around all of the kids.”)

Ms. Rutledge has a background in dance and classical music herself, and thought New York-based Shen Yun brought all of the arts together. There was classical Chinese dance used to tell stories and the history of China, an orchestra blending East and West, a digital backdrop, and countless handcrafted costume pieces for each dance. “It was the most spectacular,” she said. “It’s the most spectacular performance I’ve ever seen.”

For Mr. Greene, the dancing was a marvel.

“I was really amazed by the way they used dance to tell the stories, and the humor that they injected into the dance,” he said. “I was just amazed at how they were able to create such nuances of thought and emotion with what they did. I was very, very impressed. I was definitely moved.”

Seeing the Monkey King cause a ruckus in the Dragon King’s undersea palace, in a mythical tale, a showdown between Buddhist monks and the Red Guard in the 1960s, or the Manchurian princesses of the Qing Dynasty, Mr. Greene felt an excitement, felt like he was pulled in, with “just the feeling of being a part of it.”

He, like many other other audience members, could connect on a spiritual level with the traditional Chinese culture presented. The culture is believed to be divinely inspired, and thus the virtues that governed society for 5,000 years come through in the traditional art form of classical Chinese dance and the stories told.

Mr. Greene said he liked how it showed the divine “can have an effect on the real world.”

“It can make the world better,” he said.

Francis Hernandez, a hair stylist, attended the same performance with Tiara Brown, and had a similar feeling.

“Grace, beauty, spirituality, and oneness” was what she felt come through in dance. In a word, it was “magnetic,” she said.

She had a prevailing sense of harmony, which came through on a physical level, and in an empathetic way that couldn’t necessarily be seen by the eye, she explained.

On stage, the dancers were perfectly in tune with each other, and in the orchestra pit, the musicians were just as on point as the dancers. She felt the spirit of the artists and wanted to thank them for their dedication.

“Having all the dancers be in sync as one and then having the music to accompany that, it just made it more powerful,” she said. “Like I said a lot of grace and beauty. That’s just what kept coming. It just resonated through the whole theme.”

She saw fairies and folk dances in a world where everything was light and harmonious. Even in the scenes and stories where there is seriousness or strife that disrupts the harmony, there is ultimately a balance that plays out, she said.

She felt that through the stories, it was reinforcing her beliefs that “we are really here to give each other hope and support and love and unconditional love, and that doesn’t happen very often theses days, so I’m really happy that they have something that shows the grace and the beauty and the spirituality as well as … keeping hope, as the ending.”