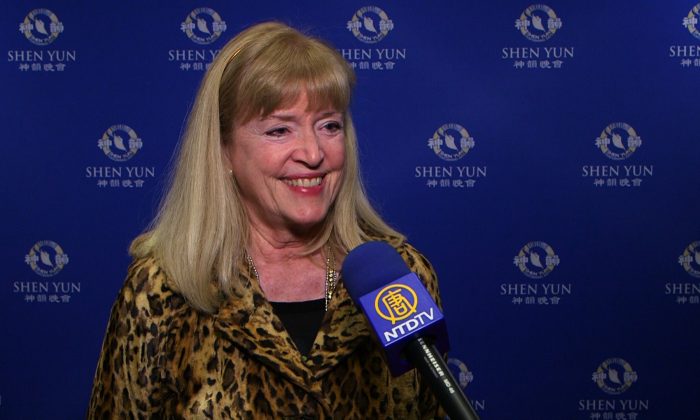 LONG BEACH, Calif.—Kathryn Forte, the former director of admissions for a major university in Los Angeles, had no idea what to expect before attending Shen Yun Performing Arts with her husband at the Terrace Theater on Sunday, March 20.

But the performance opened her to a whole world of culture she never thought she could experience.

“I think they are amazing!”  Mrs. Forte said of the artists. “Obviously very dedicated, very talented. They’ve studied for years to be as precise and good at what they do, so I would just like to thank them from the bottom of my heart.”

Shen Yun Performing Arts entered the world stage in 2006 with the lofty goal of reviving the 5,000 years of true Chinese culture.

Based in New York, the company “features the world’s foremost classically trained dancers, a unique orchestra blending East and West, and dazzling animated backdrops—together creating one spectacular performance,” according to the Shen Yun website.

“All of it was spectacular,” said Mrs. Forte. “It was colorful, it was elegant, it was transcendent, it was inspiring.”

During the performance, a few vignettes displayed modern Chinese history’s phenomenon of spiritual and religious persecution. Though this was upsetting, Mrs. Forte said she found hope in “the ability to withstand persecution, to rise up and keep that faith and believe in the future, because that’s what changes the world.”

Mrs. Forte said Shen Yun was eye-opening and very educational, especially to people in the U.S. who may not know very much about China. She intended to do more research into traditional Chinese culture in the near future.

Over the course of the performance, several different powerful ideals became apparent to Mrs. Forte.

Mrs. Forte said the experience uplifted her and was the kind of thing that would stay with her for days and days.

“I just hope that China will become free someday,” she said.

She recommended the performance to others and said she would go home and send an email about it to all her friends and family.

“So I’m a convert, and I’m coming again next year,” said Mrs. Forte.