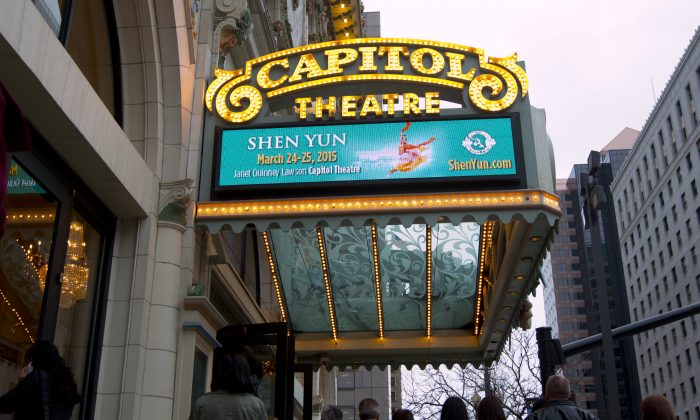 Ms. McKay is an artist employed by the Western Governor’s University, and she attended the traditional Chinese music and dance performance with Ms. Kristen Piercey, and grandmother Ms. Jan Piercey on March 24, 2015.

“We loved every second of this show. It was beautiful,” said Ms. McKay, at Janet Quinney Lawson Capitol Theatre in Salt Lake City.

She continued, “The feeling of love they have for what they’re doing can be felt throughout the show. You could tell that all performers loved to perform and were passionate about it. You could see all that in how they expressed themselves through their dance and their music. Everything just came from the heart.”

Ms. Piercey enjoyed another aspect of the performance: “I enjoyed learning about China’s history and the cultural aspects. I gave me a little window into cultures that I didn’t know very much about, so I loved that.”

“Through the universal language of music and dance, Shen Yun weaves a wondrous tapestry of heavenly realms, ancient legends, and modern heroic tales, taking you on a journey through 5,000 years of Chinese culture. Its stunning beauty and tremendous energy leave audiences uplifted and inspired,” Shen Yun says on its website.

Grandmother Piercey said, “We loved the colors and the exquisite decor of everything, as well as the talent, the absolute, incredible talent.”

“The idea of being able to connect with each other and the divine. It was beautiful. And, to be able to meditate and grow was just amazing,” said Ms. McKay.

She added, “This is the first time I have seen a computer generated backdrop where people appeared in it, come to the stage and then returned to it. It was seamless. It was amazing,”

Grandmother Piercey agreed. “That describes it perfectly. It was amazingly seamless the way they infused the live talent and the technology.”

“These digital backdrop designs complement and synchronize all aspects of the performance: the characters, color of the costumes, specific dance movements, props, lighting, the story being told, particular notes played by the orchestra, and special audio effects,” the website states.

Difficult to Put Feelings into Words

Mr. Jerry Meiling, a retired vice president, said that the show “was excellent. I think it was just a marvelous show. I have a hard time putting in words the kind of feeling I have, but it was very, very good.”

This show “did surprise me. I had no idea what I was getting into.”

“I was really impressed with the interface between the video, the performers and the music … I’ve never seen anything like that, so it was very good,” he said.

“Marcias Heines, a missionary involved in farmland reserve, and her husband Mr. Richard Heines, were in the audience as well.

“The costumes are absolutely beautiful. The precision of the dancers was extraordinary, but I was most amazed by the digital backdrop,” said Mrs. Heines.

“I was very impressed with the use of electronic media, along with the traditional dances, it is quite charming,” said Mr. Heines.

He continued: “I find that there is a spiritual aspect to what we are seeing. There are virtues, such as compassion and tolerance brought out by the show. I feel these are virtues very much needed today.”

His wife explained, “I think today there is so much diversity. Because of the media we see instantly what is going on in the world. But, we are not seeing compassion, and tolerance for one another and can not see beyond our differences. This is something that we should do.”

“Whether set in the past or in contemporary China, every dance embodies traditional Chinese values. Ideals of loyalty, filial piety, and veneration for the divine are cherished and celebrated. Heroes are extolled for their compassion and tolerance as much as their courage or determination when facing adversity,” the website states.

Reporting by Sally Sun and Heide B. Malhotra