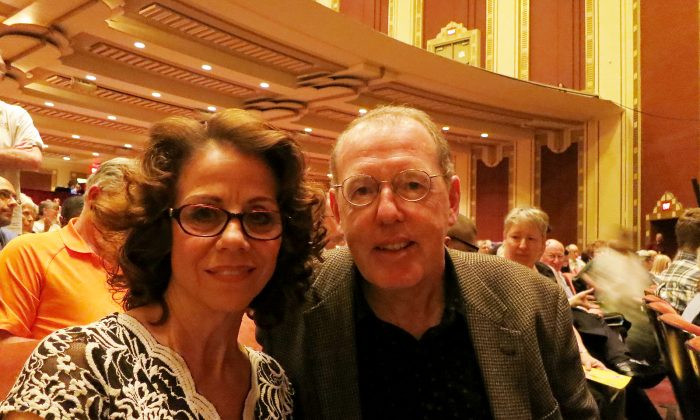 DAVENPORT, Iowa—For Angela Walton, Shen Yun Performing Arts is “opening our eyes, our minds, and our hearts” to the spiritual truths the company is bringing to audiences.

“And how beautiful it is … in the spiritual aspect,” the hairdresser said.

“The dancing, really quite gorgeous, both the men and the women,” said Ed Kelenyi who accompanied Ms. Walton to the Alder Theatre on April 17.

Shen Yun brings 5,000 years of traditional culture to the world through the universal languages of music and dance—most especially through dance. Acclaimed as the world’s premier classical Chinese dance company, Shen Yun highlights the dance’s capability for expression by using it as a vehicle for storytelling.

Ms. Walton understood the stories and felt the dancers did a great job depicting them, while Mr. Kelenyi, an engineer for Rockwell & Collins, mentioned some of dances that stood out for him.

He enjoyed the “Monkey King and the Dragon Palace” telling of travails of the famous character from classic literature. In the humorous adventure, the Monkey King needs a weapon suitable for his great supernatural powers, and he finds one at the bottom of the sea.

Mr. Kelenyi also enjoyed the “Monks and the Red Guards,” which told of actual events that happened during China’s Cultural Revolution. It was time when teenagers were conscripted by the communist party to destroy traditional cultural artifacts and buildings.

He didn’t realize the oppression of the spirituality in China was as severe as “depicted in this beautiful show.”

The communist party’s suppression of spirituality in China continues to this day, as a couple of the dances show. Nor can Shen Yun perform in China, despite sold-out performances and tours to more than 130 cities around the world.

Carol Cox, who also at the Davenport performance, felt it a shame that Shen Yun could not perform in the land it extols.

“It’s beautiful and it’s telling their story from so many years ago. It’s beautiful, it’s ethereal, it’s just—it’s more than I expected,” said the retired bookkeeper.

Her husband, Jim, superintendent of Northeast Community School District, felt that as members of a global society, students, little exposed to a culture as foreign as China, could benefit from being introduced to a performance like Shen Yun, which showed the “true culture of China.”

That true culture, infused with spirituality, is certainly valuable to adults. For “the awareness of the truth about the culture,” Ms. Walton said, “I’m just very thankful, very thankful.”