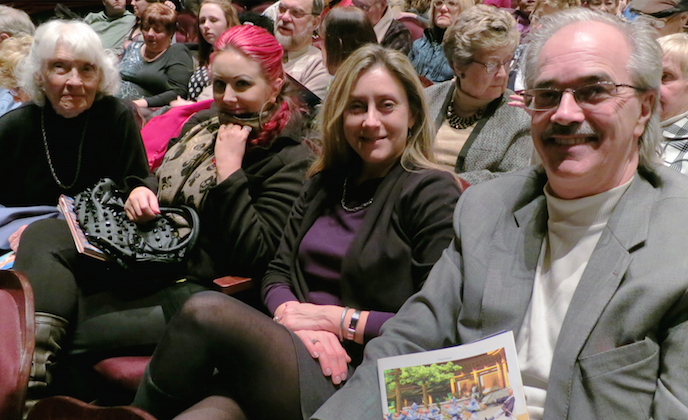 MILWAUKEE—George Erwin III brought his girlfriend, daughter, and mother to more than an evening out. They experienced a journey through 5,000 years of divinely inspired traditional Chinese culture and its values as presented by Shen Yun Performing Arts World Company at Milwaukee Theatre, on March 5.

Shirley Erwin, George’s 84-year-old mother, said that Shen Yun was “amazing because I’ve never seen any dance like this. It is so precise, so expressive. I mean even the way they move across the stage. It looks like they are gliding … you don’t feel like there are footsteps.”

Mr. Erwin, an attorney, added to his mother’s comments: “The other thing, it seems so serious, the dance, their concentration, and their faces. They are very serious about what they are performing.”

He elaborated, saying, “The concentration, the commitment to their dance is just so serious to me. They are just focused on what they are doing. It’s that playful and everything is precise.”

Shen Yun is the world’s premier traditional Chinese dance and music company. According to the company’s website, “Chinese dance is at the heart of what Shen Yun does. Known for its incredible flips and spins, and its gentle elegance, it is one of the most rigorous and expressive art forms in the world.”

This distinct and separate system of dance often encompasses precision group dancing with traditional props such as drums, long flowing silk shirt sleeves, and even chopsticks.

“Attention to detail would be the phrase,” said Mr. Erwin to describe the values expressed by Shen Yun.

“Entirely non-profit, and independent of the Chinese regime, Shen Yun enjoys the artistic freedom of New York, enabling it to now bring these ancient traditions to the stage,” the company website states.

Mr. Erwin questions whether modern people can fully appreciate what the performance offers to today’s world.

“I don’t know if [modern people] can appreciate the effort that is actually going into what I am seeing,” said Mr. Erwin. “They take things more for granted. There is more of a focus today on the immediacy and just getting from point A to point B. … I think it is being lost in terms of just seeing the detail there, and not appreciating the detail that is actually occurring. I don’t see that in modern people, they just want the immediacy.”

“I see [spirituality] in everything [the Shen Yun performers] do, it just goes back to the same words that I used, the commitment and seriousness of what they do,” Mr. Erwin concluded.