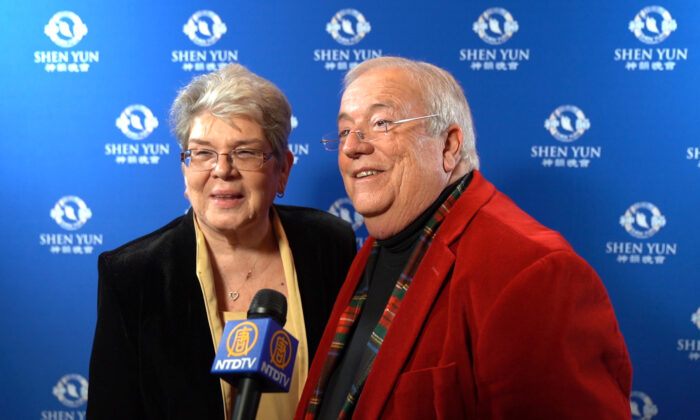 ATLANTA—Sometimes an artistic experience is so colorful, original, spiritual, and wondrous, the only word to describe it is “enlightening.”

“It was really very, very enlightening and I enjoyed it very, very much,” said Michele, who is a former educator and the co-owner of a retail business.

“I was thoroughly impressed, very impressed. We … hope to come back next year,” she said, referring to Randall Smith, her husband and business partner, who attended the evening with her.

“We were looking to get the history, and there was a lot of history that came through. We love the folk dances and all of that so it was quite special,” he added.

What stood out the most to the Smiths was the spirituality incorporated into Shen Yun’s dances, songs, and stories. Ancient Chinese culture, the tradition that Shen Yun is dedicated to reviving, is full of reverence toward divine beings.

Watching the spirituality come down in the culture, I’m very impressed with that.
— Michele Smith

“Watching the spirituality come down in the culture, I’m very impressed with that,” Michele said.

“It was very interesting to see how most religions have one sovereign God, the Creator, and we all do different things with it,” she added.

Randall was especially moved to share his experience at Shen Yun, adding that the spiritual aspect touched him personally, yet had universal appeal.

“You see the centuries of growth but also the underlying understanding that the Creator, God, is a part [of life], even in those settings where it sometimes has been taken away, from the governmental aspect and things of that nature—the secularism that is sometimes thrown upon, whether it’s from a country or community, whatever the case may be. [Despite that], the people feel the spirituality and it continues to grow and I think that was portrayed here very nicely, beautifully,” he said.

“I would hope that [more people] would come and see [Shen Yun]. I would like to see more myself honestly. Culturally, it is giving the storyline,” he said.