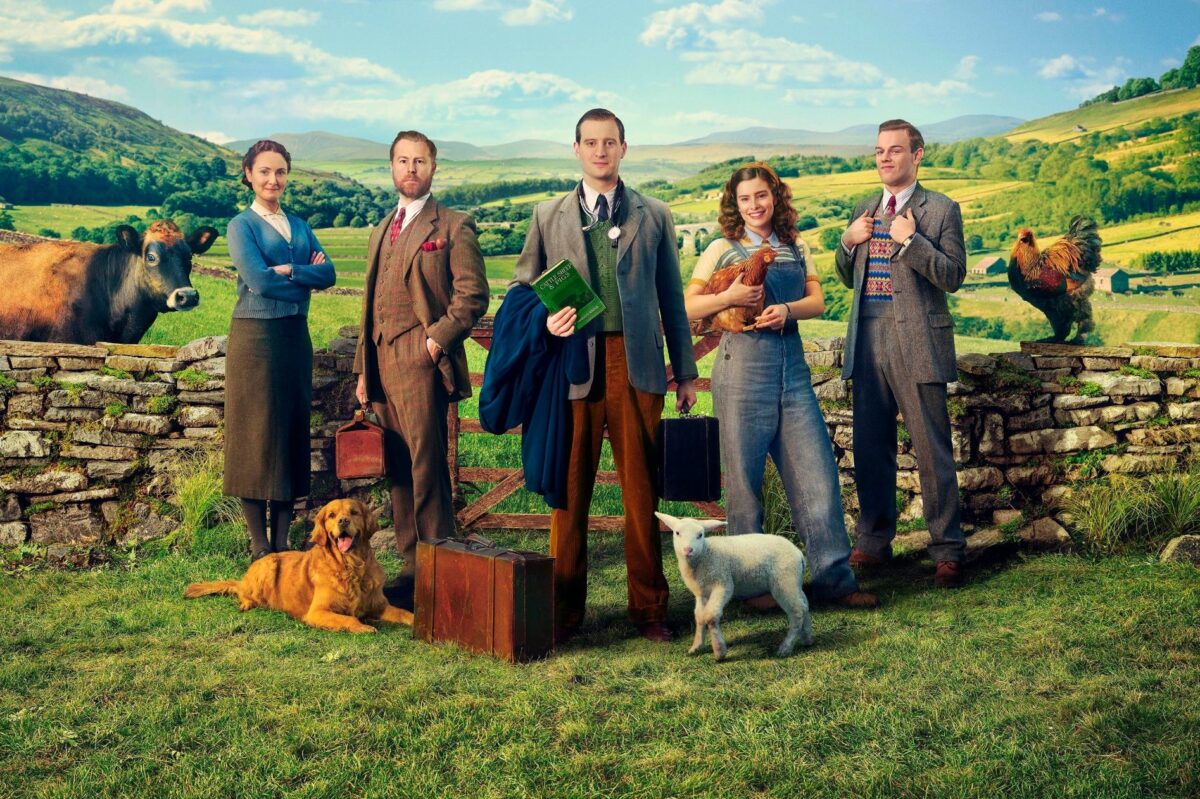 The cast of "All Creatures Great and Small." (PBS Masterpiece)
Film & TV

At Last: Some Sophisticated, Feel-Good Television for the Whole Family

In a sea of unseemly sitcoms and romcoms that sometimes seem locked in a race to the bottom, Masterpiece’s “All Creatures Great and Small” is everything television could be, and should be.

Unfailingly wholesome, lusciously filmed, full of wit and humor, immediately captivating, and impeccably cast—this is one made-for-television series you’ll want to imbibe. Think of it as a cup of cozy British tea, perfectly served, while wrapped in the gentle embrace of your favorite duvet.

I can’t think of a better on-the-air antidote to the melancholy of pandemic life we’ve all grown so weary of.

Set in the 1940s, in the aftermath of World War I, “All Creatures” transports you to the rolling, emerald green hills of rural Yorkshire, England. It’s a timeless, bucolic landscape dotted with sheep and bracketed by stone fences so idyllic, it’s hard not to fawn over.

It was here that England’s—if not the world’s—most celebrated veterinarian, “James Herriot” (or Alf Wight, as he was actually named), practiced his craft. And, importantly, wrote about it.

Herriot penned fully eight memoirs in all, spanning over three decades of practice. The books quickly endeared Herriot and his colorful cast to the hearts of readers on both sides of the Atlantic.

I discovered their appeal rather surreptitiously—and reluctantly—while a still rascally 10-year-old hemmed in the backseat of my parent’s car, en route to New England to visit relatives many years ago.

My mother had negotiated with my brother and me for “just one story” from an audiobook of Herriot’s that she had gotten out of the library (then on cassette tape). It was her turn to govern the stereo, having just dutifully endured multiple rounds of “Ewoks: The Battle for Endor” audiobook, which my younger brother and I found endlessly enthralling.

We had dreaded the prospect of having to sit prisoner to Mom’s “grown-up” tape about some vet and sick animals.

Five minutes in, we were spellbound.

After 15, we clamored for more.

There was a tremendous grace—and humanity—to Herriot’s storytelling that somehow managed to not only sedate, but enrapture, two rambunctious kids who only moments earlier were ready to burst out of their seatbelts.

That same magic that I remember on that ride—and the many that followed, over the years—comes through every bit in this latest television adaption of Herriot’s memoirs. (They were previously adapted for television in the late 1970s, and such a hit as to continue on for eight seasons.)

There’s of course the inherent drama of Herriot’s veterinary adventures. Whisking off in the middle of the night to help with a cow’s breech birth out in the barn. Resuscitating a flock of fleecy sheep that were chased to exhaustion by a runaway dog.

The drama of those distant audiobooks translates fantastically to the screen, and you’ll find yourself and the whole family sitting on the edge of the sofa as young Herriot races against the clock to save these creatures, great and small.

But every bit as compelling, and what really adds layers to the storytelling, are the relationships among the characters in Masterpiece’s rendering. (They gain greater prominence, and perhaps richness, I dare say, than in their original telling.)

Herriot (played by Nicholas Ralph) is the newbie in town, having just graduated from veterinary school in Scotland, and being marked as such by his highlander accent. He’s not only faced with the challenge of earning the locals’ respect, but also holding down his job under a most capricious taskmaster, Siegfried Farnon (played masterfully by Samuel West).

Farnon is a hardened man from the start, seizing upon Herriot’s every fault while being short on praise. He is closed and ornery owing to, as we later learn, the loss of his wife not long before, and faces the added challenge of playing in loco parentis to his lazy, wild-child younger brother, Tristan—who joins the practice after, more or less, completing his stint at vet school.

(Tristan, it should be noted, provides a sharp contrast to the ever upright and diligent Herriot—as if reminding viewers of what different paths of life we can each choose, and to what drastically different effect. Lots of “teachable moments” here for parents!)

Rounding out the picture is the remarkable figure of Mrs. Hall, Farnon’s housekeeper, and a young woman named Helen, whom Herriot quickly falls in love with.

What makes the relationships so enjoyable is the depth that each character possesses, and above all, their capacity for kindness. They genuinely seek to do good in life, to care for one another, and ease the suffering of others—including our four-legged and feathered friends—in the world.

As a result, each episode just abounds in goodness, and offers some kind of life lesson any family can feel good about. Forgiveness. Giving second chances. Seeing the good in others. Doing the right thing. Courage. Perseverance. Patience. Caring. It’s a cornucopia of good values that can rejuvenate even the most tired of souls.

And while there’s an underlying sweetness about the whole thing, it’s never forced or overly sentimental. It feels genuine, fitting, and just can’t help but put a smile on your face.

When asked to comment on the show, producer Colin Callender remarked, “I felt that what I wanted as a viewer myself, and what I felt that the audience wanted, was a show that we could all watch together, that could somehow reaffirm the basic values that inform Britain at its best—community, care of others, family, all those great things which I think we’ve sort of lost along the way.”

You can watch “All Creatures,” both seasons 1 and 2, on PBS television as well as on Masterpiece’s website with a subscription. The shows are also available on DVD from retailers.

And if you quickly find, like my family has, that two seasons aren’t enough, despair not: It was just announced that seasons 3 and 4 have been confirmed and are in the works.