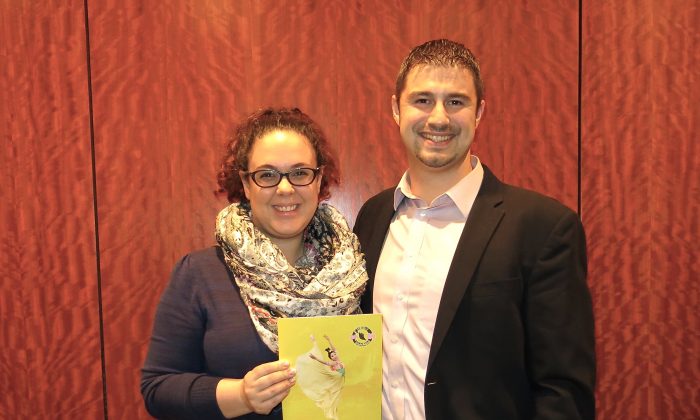 GRAND RAPIDS, Mich.—Opening night for Shen Yun Performing Arts Touring Company at the DeVos Performance Hall on Dec. 29 proved to be a serendipitous experience for Dr. Mario Manual and his wife. He wanted to treat his wife to a Shen Yun performance for Christmas, so they drove two and a half hours to Grand Rapids to make that happen, their first visit to this city.

“It was very beautiful. We came for the costumes and dance, and we got all that and more. Overwhelming!” he said.

Mr. Manual is a research scientist in astrophysics at the University of Michigan, and he thought Shen Yun was a beautiful, beautiful show.

“The costumes, the sleeves, the water sleeves … those were gorgeous,” he said. “I came in expecting it to be beautiful, light and colors and everything, and it definitely fulfilled all of that.”

Ms. Manual is a management consultant for a large company and she also appreciated the dancing.

Ms. Manual appreciated the mix of the instruments in the orchestra. “The music was really cool,” she said.

The backdrops added an extra dimension for Mr. Manual. “It was clever. It was interesting. … It obviously brought another element to the show, I wasn’t expecting that.”

Shen Yun incorporates mini dramas crossing millennia which give a snapshot of Chinese culture and history. According to their website, “Shen Yun dances recount ancient myths, bygone heroes, or celestial paradises. Whether set in the past or in contemporary China, every dance embodies traditional Chinese values. Ideals of loyalty, filial piety, and veneration for the divine are cherished and celebrated. Heroes are extolled for their compassion and tolerance as much as their courage or determination when facing adversity.”

The Manuals found these dance pieces interesting and educational and left them wanting to find out more. They felt it is a pity Shen Yun cannot be seen in China today.

“It’s such a beautiful history, I would imagine that it would be something you would try and keep alive and cultivate. It sort of blows my mind that they wouldn’t do that. So that was enlightening to see to say the least,” Mr. Manual said. “This sad to a certain aspect, that is not allowed over there.”