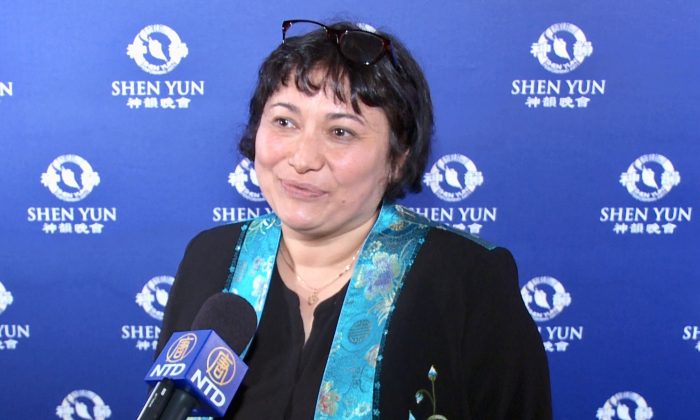 Hilary Breman was taken by the colors she saw at Shen Yun Performing Arts at Melbourne's Regent Theatre on Feb. 17, 2019. (NTD Television)

MELBOURNE, Australia—Educator Hilary Breman was taken by the colors she saw as well as the beauty of movement as she watched Shen Yun Performing Arts’s last performance in Melbourne.

As a visual arts teacher at a Melbourne secondary college and on a mission to inspire her students into making and responding to artworks, Breman appreciated the educational content of the Shen Yun performance, presented at the Regent Theatre on Feb. 17.

“Oh, the complementary colors involved and the beauty of movement is absolutely exceptional. And I think the rhythm would be most inspiring for the students,” she said.

New York-based Shen Yun’s costumes are filled with vibrant hues and exquisite details; they help bring to life a storied past and mythical worlds. Each season, the all-new program calls for hundreds of new handmade costume pieces.

Shen Yun’s performance takes the audience on a journey through the five millennia of authentic Chinese culture. Stories are told mostly through classical Chinese dance with its expressive ability, an interactive backdrop, and accompanied by an orchestra combining the musical essence of both East and West.

Throughout the many dance pieces Shen Yun artists’ costumes reflect the traditional attire worn in China’s different regions and climates and during various dynasties: From the Yi ethnic dance with skirts featuring large, colorful bands of bright color to the Mongolian blue and brown robes with long, wide sleeves, providing perfect protection in cold weather.

Breman’s artistic eye picked up on the costuming.

“It’s very enjoyable, there’s a great variation of different styles from different periods in China—and the content is absolutely wonderful,” she said.

It is said that traditional Chinese clothing was inspired by the attire worn in the heavens. Each dynasty brought in different styles, from the Ming Dynasty with their brocade robes to the Golden Age of the Tang Dynasty and long, silky sleeves known as “water sleeves.”

Breman found Shen Yun’s mission, to revive traditional culture and its divine origins, inspirational. Since 1949 the Chinese communist regime has tried to systemically destroy these traditions. Most recently, in the past two decades the regime has persecuted people who follow an ancient meditation practice called Falun Dafa.

Breman appreciated the story-based dances set in contemporary China and based on true stories. Shen Yun dancers’ display of the oppression of belief moved Breman to tears.

“I think it’s fantastic, that [Shen Yun dancers] are able to bring that expression and it definitely did bring tears to my eyes—because of the injustice that we have seen, in the past and sometimes unknown,” she said.

“I find it so beautiful, they dance like feathers, it’s just, they’re just flowing—and it’s beautiful. I like the costumes—they’re really beautiful,” she said. Gomes said she was feeling drawn in to the classical Chinese dance she saw on stage at the Sunday matinee.

An ethnic dancer herself, Gomes said she admired the dancers’ skills.

“The ladies with their flowing dresses, that’s so beautiful. And the way the guys performed, it’s like they have [the] concentration of a dancer that they just do the movement so easily—it’s amazing,” she said.

Many poses that might look very simple, but actually require the perfect coordination of every part of the body. Classical Chinese dance, a comprehensive dance system refined over thousands of years, also requires highly difficult techniques including jumping and leaping, turning, and flipping.

Gomes appreciated how the entire production came together to tell the story through dance.

“The colors are just fantastic—happy, happy colors. … The background that is so well done, the background, it’s like they portray magic,” she said.