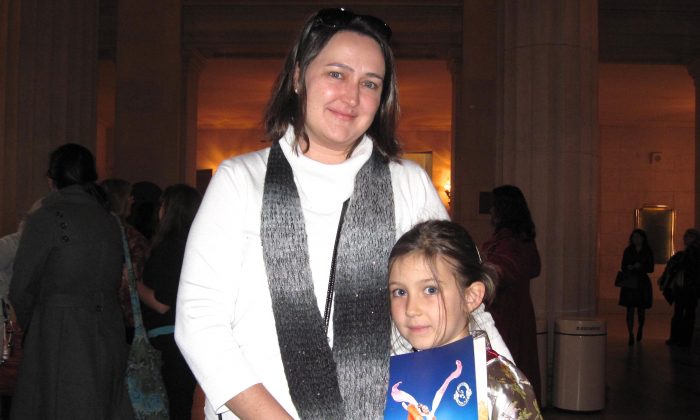 Ms. Oliver is a musician and board member of the San Francisco Lyric Chorus, an auditioned, mixed-voice chorus that performs a diverse repertoire with an emphasis on classical choral music and rarely performed works.

Ms. Oliver attended the performance with her daughter, who loves dance and participates in an after-school program at Fei Tian Academy of the Arts California. Fei Tian instructs students in classical dance, music, and fine arts.

Ms. Oliver was particularly impressed by New York-based Shen Yun’s women dancers, especially when they performed as a group. “We could see the whole stage and all of the formations, and when they would come together and spread out—it was beautiful,” she said.

“The dancers—they are so athletic, and graceful, and precise.”

She elaborated, “sometimes dancers dance and it’s movement, but sometimes there’s an obvious passion, and I felt that there was a lot of obvious passion in the dancing.”

Mrs. Jone’s husband Will Furth is a retired sculptor and arts administrator. He said the digital backdrop and animated settings “gave a great dimension to the show.”

Lars Foleide, CEO of Nevara, an urban farming platform, said he was captivated by the animated dragon which appeared in one of the story dance pieces, and the use of animation as a way to visually convey ancient stories that traditionally would have been passed on verbally.

After seeing the Shen Yun performance, he took away that there is hope that “something from 5,000 years ago—and is long gone—that it might flourish again.”

He added that he would strongly recommend Shen Yun to friends.