Arts Entrepreneur: Each Shen Yun Dance Like a Work of Art 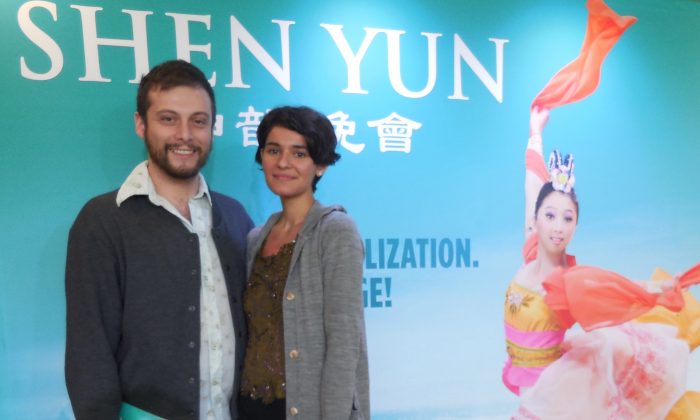 AUSTIN, Texas—For arts entrepreneurs Will Kauber and Jen Rachid Shen Yun Performing Arts was like a series of stunning works for art. They saw Shen Yun perform Monday Dec. 29 at the Long Center for the Performing Arts.

“Every new dance was like a new art piece visually, and it was very stunning to watch,” said Mr. Kauber.

Mr. Kauber and Ms. Rachid are half of the team behind Raw Paw, an Austin-based publisher and record label. Raw Paw’s main product is a submission based magazine of prose and visual art.

“We run an art magazine so it’s always beautiful to see colors in movement. Usually I only see color palettes standing still. So to see them moving around and dynamic was really an experience,” Mr. Kauber said.

In addition to the colorful costumes worn by Shen Yun dancers, Shen Yun uses a projected digital backdrop that provides the scenery. The colors of the backdrop often complement those of the dancers’ costumes.

“It was really inspiring to see all the colors and all the movement and such discipline! Things that look so simple and then how intricate and just complicated but yet, you are just like, oh my God, how are they doing that?”

Chinese dance is the heart of Shen Yun performances. According to Shen Yun’s website, Chinese dance is “known for its incredible flips and spins, and its gentle elegance, it is one of the most rigorous and expressive art forms in the world.”

The website also states that classical Chinese dance “was once passed down among the people, in imperial courts, and through ancient plays. Over thousands of years, it was constantly refined, eventually developing into the vast and distinctly Chinese dance form we know today.”

“It’s just really amazing to see such graceful, synchronized movement. It was just stunning, it was chillingly stunning,” Ms. Rachid.

These artists said the aesthetic beauty of Shen Yun was not the only aspect that struck them. They praised its music, particularly the two-stringed Erhu, “such a powerful instrument,” said Ms. Rachid.

They also connected with the deeper content of the program.

Mr. Kruber said he was struck by the soprano soloist who sang about overcoming evil and corruption.
“In terms of world events and things that I believe in, and so to take it into the different cultural context, but then know that they are singing about a very similar feeling was very touching”, said Mr. Kruber.

Some of the programs performed by Shen Yun also portray contemporary stories of courage, faith, and persecution happening in China today.

Ms. Rachid said she was surprised to learn about the lack of freedom in China today faced by practitioners of Falun Gong, spiritual practice that teaches truth, compassion, and tolerance.

“We are allowed to practice whatever we want here, and it’s kind of upsetting to hear,” she said.

“I saw it as salvation,” Mr. Kruber said of the final program. “Both on a grand scale but then also artistically, the salvation of art and bringing it back. In terms how the show is about bringing back the culture and the tradition.”

“It was very stunning, and I’m very inspired leaving here with so many ideas in my head,” said Ms. Rachid.