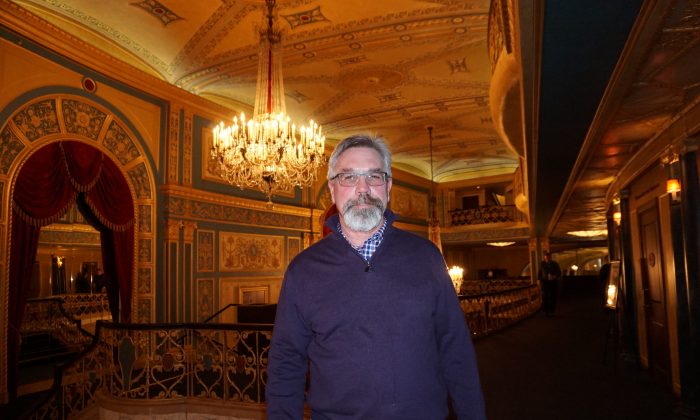 DETROIT—Cellist Rick Carl saw Shen Yun Performing Arts Global Company’s matinee performance on March 2 at the Detroit Opera House, and it was much more than he expected.

“I love it. It’s way better than I expected. Very colorful, very interesting. I like the screen in the background. It adds a whole other dimension,” Carl said.

Rick Carl is a superintendent for Grainger Construction out of Lansing, Mich. In his spare time, he is a freelance cellist performing with several smaller orchestras in Adrian and Ann Arbor Mich.

Carl said the performance was “entertainment, but it’s educational too.”

It showed the history of China, through stories and legends, and the art and narrative together showed why China was once known as the Celestial Empire.

Like many in the audience, seeing Shen Yun’s presentation of the authentic traditional Chinese culture really drove home what China lost under the communist regime.

As a cellist who has played many productions for various orchestras, Mr. Carl felt Shen Yun’s orchestra was transcending, and brought more legitimacy to the overall performance.

He also commented on the digital backdrop, which took the performance somewhere else.

“I like the transitions from the stage to the end piece,” Carl said of the interactive backdrops. “It’s very clever. It’s a mix of fantasy and reality. It transcends to a whole another level. It’s very transcending.”

A. T. Miller, Vice President and Chief Diversity Officer of Central Michigan University, was also in the audience at the Detroit Opera House, and was impressed by the overall artistic presentation of beauty.

“It is just the sweep of presenting all different styles from the many regions of China and from all different periods of history, I think it is nice to see it brought together,” Miller said.

“I think in all the arts we really try to express love for humanity and the beauty across from the stage to the audience so it is very much a communication kind of effort,” Miller said.

Miller is a great lover of the arts, and appreciated Shen Yun’s efforts to preserve the traditional arts they tour the globe with.

As a professional singer, who performed with the Renaissance music ensemble Ancient Voices, Miller was impressed by the bel canto vocalists who took to the stage singing original Chinese compositions as well.

“I enjoyed that very much,” she said. “I didn’t know that it existed in China but having that, using the whole body to sing, I know it is from the Western style … I’m a singer myself, and so knowing that and being able to fill the room as a single person without a microphone—you know bel canto is a very profound art and it was beautiful to hear it.”

Also in the audience was Lee Ann King, classical ballet instructor and examiner for the Cecchetti Council of America.

“I loved the choreography, I loved how well-rehearsed and together they were, so it was really amazing,” King said. “I really did enjoy it.”

King ran the Sylvia Studio of Dance for nearly four decades, and still works as an examiner for students and teachers who want to be certified in the Cecchetti classical ballet method.

As a dancer, she noticed the differences and similarities to ballet straight away. She said she would tell her friends to see Shen Yun as well.

“I loved the video screen and how that was implemented to help the story,” she said. “Very effective, very clear and simple. I would definitely tell people to come.”