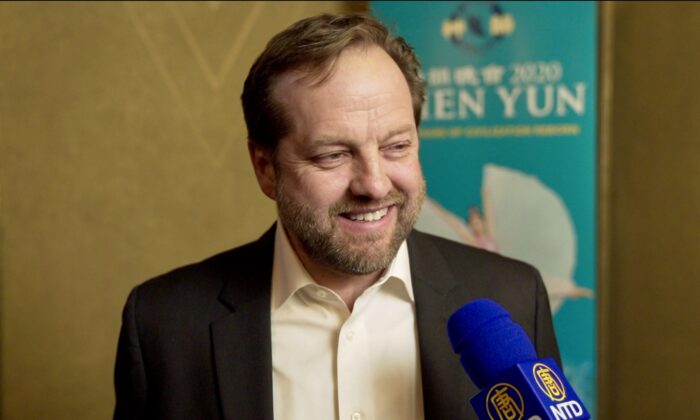 Brian Horton enjoyed Shen Yun at the Flynn Center for the Performing Arts in Burlington, Vermont, on Feb. 15, 2020. (NTD Television)

BURLINGTON, Vt.—Athleticism, integrity, a divine connection, and sheer beauty were some aspects of Shen Yun Performing Arts that stood out to audience members in Burlington, Vermont.

“I have never seen that level of choreography before, it’s amazing really,” said Brian Horton, entrepreneur and owner of multiple businesses, after seeing the performance at the Flynn Center for the Performing Arts on Feb. 15.

He said Shen Yun surpassed other performances he’s seen and that he was moved by the overall effect of so many dancers moving perfectly in sync.

“When the dancers are all moving in unison it’s powerful,” he said.

He also said that their passion for their art and their desire to revive traditional Chinese culture was “contagious.”

With China-based coronavirus spreading fear around the globe, Shen Yun’s performances are continuing as scheduled. This is because none of the company’s members have recently been to the Mainland, the company explained in a press release.

“Shen Yun’s performers—dancers, musicians, as well as technical crew—all live and train in New York. As individuals, they are also banned from traveling to China, long ago having been blacklisted by the Chinese government for their involvement in Shen Yun. No performer has been back to China in years,” the release states.

This is because Shen Yun was founded by ex-pat Chinese artists, who felt an urgent need to revive China’s dying traditional culture through the performing arts.

“Such a mission could only be undertaken outside of China. That is because in China the communist regime has spent the last seventy years trying to systematically destroy traditional culture, values, and the arts,” the press release explains.

Freedom of religious belief, historically something dear to the hearts of Burlingtonites, has also been targeted for extinction in China under communist rule.  In 1791, the University of Burlington became the first university to publicly declare support for freedom of religion, the university website states. To this day, the Chinese Communist Party still persecutes Christians, Uyghur Muslims, and practitioners of the self-cultivation way of Falun Gong for their faith.

Professor of geography at the University of Vermont, Beverly Wemple, said she found the performance “very beautiful” and that the animated digital backdrop really enhanced the performance.

Another audience member, Lori Sadewicz said she learned new things about Chinese culture from the performance and one thing that stood out to her was the importance of faith.

“Well without faith we don’t have integrity and honesty,” she said.

She also appreciated the beauty of the costumes and the unique sounds of the Shen Yun orchestra which blends traditional Chinese instruments into a traditional Western orchestra.

AJ Fucile, director of the box office at the theater, came with his wife and children. He said he was impressed with the flexibility of the male dancers.

“I would snap in half if I tried to do that,” he said, referring to some of the male dancers’ moves in the piece “The Novice Monks.”

Fucile also said he was thrilled by the orchestra and that the way performers seemed to appear and disappear into the animated backdrop was his favorite element.

“We loved the show, the costumes are absolutely beautiful, … and the stories are elegant,” Mrs. Lane said.

She said it was a very rich experience for them.

“You can’t put the money on the value, … we’ve never seen anything like it,” she said.

With reporting by Deping Xie, Weiya Yang, and June Fakkert.