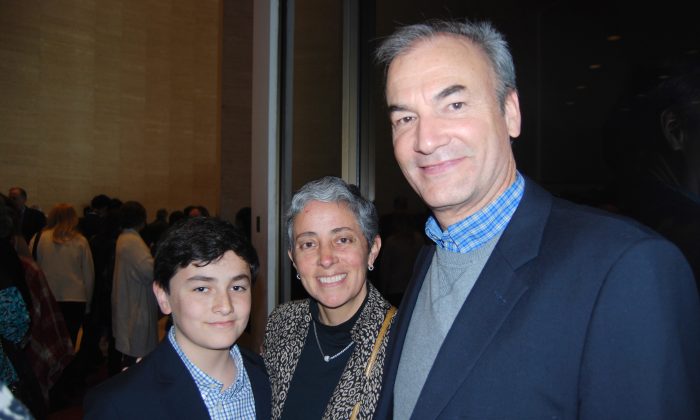 HOUSTON—Artist and set designer Rod Flower was inspired both artistically and personally by Shen Yun Performing Arts, attending the performance with his wife and son at the Jones Hall for the Performing Arts in Houston, Dec. 31.

Mr. Flower said the colors Shen Yun used harmonized with everything they did to tell a story, and left him with “a sense of hope.”

New York-based Shen Yun was formed by artists from around the world to revive 5,000 years of divinely inspired Chinese culture through music and dance.

“Beautiful artistry—they meant it to sustain the tradition … to uphold the traditions of the Chinese culture,” Mr. Flower said. “Through everything it’s their sense of hope for the future. For humanity, for their people.”

Mr. Flower was touched by what Shen Yun has accomplished in their eight years of touring.

“I think that’s an incredible achievement for them that they’re able to take all the elements of the past, weave it into these different stories, and be able to tell the story. And each one has a very uplifting, very positive message to it,” Mr. Flower said. “It’s incredible.”

Mr. Flower said the first thing he noticed was the theme of good triumphing over evil in Shen Yun’s stories told through traditional Chinese dance.

“No matter what struggles that people may have, that at the end they’re left with a sense of peace and understanding that they’ll work through it together,” Mr. Flower said. He added it was a very relevant ideal to hold for any community, that by working together they can triumph over evil in the end. “It was very beautifully done.”

Mr. Flower, who designs stage sets, home theaters, and paints murals and portraits, had been looking for artistic inspiration as well, and found it through Shen Yun’s use of color.

“It’s extremely intricate,” he said of Shen Yun’s staging, which includes an animated digital backdrop and brilliant all-new costumes every season. “I loved the silk, all the tapestries of all the different embroideries and colors coming through, and the way all the colors harmonized together.”

Mrs. Flower, a developer of human resource systems to many leading Fortune 500 companies, was taken by the visuals through which Shen Yun presented the Chinese culture as well. She noted the differences in the classical Chinese dance, the grace of the female dancers, and the strength of the male dancers.

“That’s perfect, wonderful,” Mrs. Flower said. “We have the opportunity to appreciate more [of] the Chinese culture.”