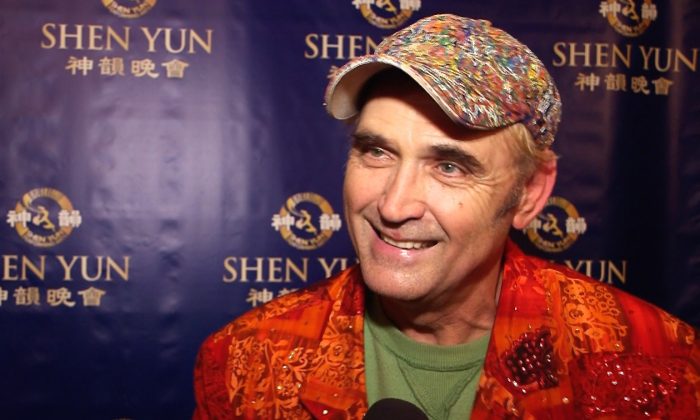 SANTA BARBARA, Calif.—A highly enthusiastic, energetic audience filled Granada Theater, March 29, to watch Shen Yun Performing Arts New York Company. The venue was sold out and people began lining the walls near the back of the theater to get a glimpse of traditional Chinese culture on display.

From the first vignette to the last, the audience could be heard through closed doors in the lobby clapping, cheering, and whistling—thoroughly enjoying the talent onstage.

One of those audience members was Pali Szilvassy, also known in the community as Pali X-Mano, an artist with an eclectic style who determines the theme of the annual Santa Barbara Summer Solstice Celebration, a multi-day celebration of art including a parade with more than one thousand parade participants that draws a crowd of over 100,000 people, according to the Summer Solstice Celebration website.

Mr. Mano creates massive, inflatable pieces of art that serve as the grand finale of the parade each year.

After watching Shen Yun, he was deeply touched by its beauty.

“It gives me lifelong inspiration,” he said. “I liked [it] very much. [I’m] very much inspired about this performance—the heavenly dancers. It was the first experience for me, and I was deeply moved and very, very inspired.”

“I have seen many, many beautiful performances in the world, but this is very unique and very complex and beautiful—very artistic, very beautifully designed—the whole thing,” he said.

Shen Yun is a non-profit, New York-based classical Chinese music and dance company that creates an all-new production each year as its four companies tour the world simultaneously on its mission to revive traditional Chinese culture.

Shen Yun’s website explains the performance, “Through the universal language of music and dance, Shen Yun weaves a wondrous tapestry of heavenly realms, ancient legends, and modern heroic tales, taking you on a journey through 5,000 years of Chinese culture. Its stunning beauty and tremendous energy leave audiences uplifted and inspired.”

“As a grand finale artist, I will definitely build in the ideas that I saw here into my artwork,” he said. “For example, the beautiful pastoral colors and the flowing silks—that will be part of my ensemble [for] the costume design and the inspiring motifs.”

A Shen Yun performance includes multiple vignettes that transport the audience through China’s 5,000-year history. In each piece, a different backdrop, or digital projection, appears, and each provides a contextual setting.

“From vast open grasslands in one dance to the stately elegance of Tang Dynasty pavilions in another; from dusty yellow battlegrounds to tropical beaches to Himalayan peaks to picturesque scenery of the Yellow River Delta—the digital projection infinitely expands and transforms the stage,” explains the company website.

“The harmony of the beautiful, fine pastoral colors changing all the time from one scenery to the other, and the visual effects with digital techniques—it’s amazing,” he said.

“I’m very much touched by the color harmony of their costumes, their movements, choreography —all the beauty of the three dimensional shapes moving on stage and the background as a continuation with the projection,” he continued.

“The digital effects so perfectly harmonize together with the live movements on the stage,” he said. “It’s a very unique experience, very much like what’s happening in heaven in the clouds.”

“If they do different performances every year, I will come back and see year after year—that is my goal.”