Artist Sees Beauty of Another World in Shen Yun 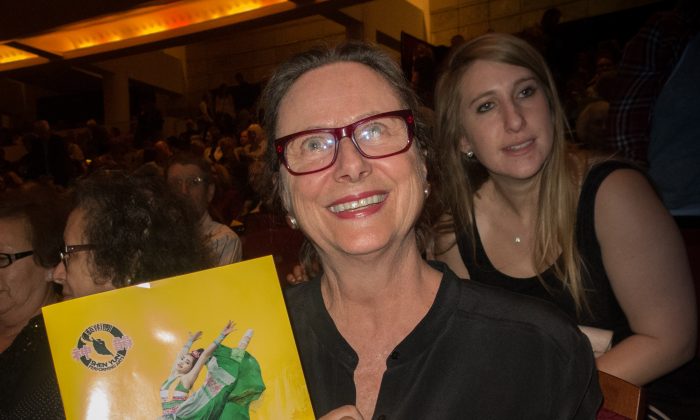 DENVER—Painter Lindsey Leavell works in bright colors, the female shape, depth and luminosity, to show unexpected views of nature and the human qualities of humility and grace.

Seeing Shen Yun Performing Arts, she saw every aspect of her inspirations in full motion. Ms. Leavell was captivated by the movement, every individual movement of every dancer, “watching every finger, every hand, every elbow, all of it,” she said at the Buell Theatre on March 6. “It’s wonderful, it’s stunning.”

The art and presentation was so beautiful that it was overwhelming, she said.

“It’s just another world, it’s absolutely another world,” she said. “It’s blossoms and light, and dance, and color, and fabric, and movement, and air, and music. So it’s another world.”

The world Shen Yun says it creates is an era past, a China when the divine and humankind were interconnected. Such a civilization was passed down continuously for 5,000 years until communism took power in recent decades and destroyed all that came before it with campaigns like the Cultural Revolution.

Based in New York, Shen Yun is a classical Chinese dance and music company that aims to revive that ancient civilization, through the arts, and bring it to the world’s stage.

Ms. Leavell found the lofty cause was communicated beautifully through the art.

“Oh it’s so compelling,” she said.

There were moments that touched her, like the dance stories about China’s modern history, and how the traditional culture is oppressed under the communist regime. The idea is heartbreaking, she said.

But there were also stories that were delightful, like one about the Monkey King, which were just as moving. It was all communicated with grace and beauty and precision in Shen Yun, she said.

“It was all flawless, stunning,” she said. “They’re all perfect.”