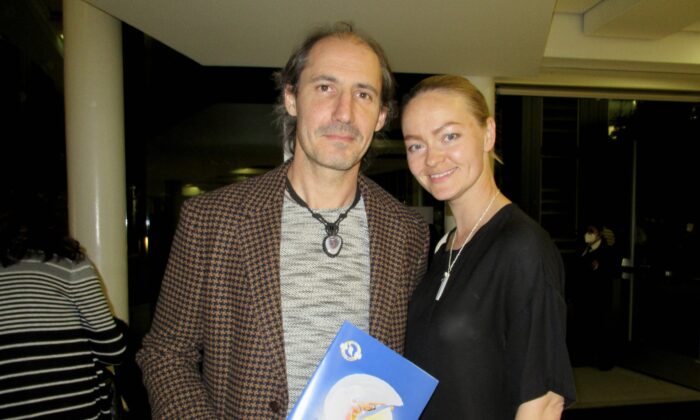 Irina Estyunina (R) and Evgeniy Skiyanskiy (L) at Younes and Soraya Nazarian Center for the Performing Arts in Northridge on May 3, 2022. (Linda Jiang/The Epoch Times)

NORTHRIDGE, Calif.—Irina Estyunina, an event producer in Los Angeles, and artist Evgeniy Skiyanskiy were amazed by Shen Yun Performing Arts at Younes and Soraya Nazarian Center for the Performing Arts on May 3.

“It’s so beautiful … the technology, the dance, the technique of the dance, and the history … and story-telling, it’s everything in one package! It’s pretty amazing … the whole thing,” said Ms. Estyunina.

Besides talented dancers, Shen Yun features a one-of-a-kind orchestra that blends traditional Chinese instruments into a classical Western orchestra and a patented animated backdrop technology that allows for seamless interaction between the dancers on stage and the background scenery.

“The live orchestra actually brings back memories because we grew up watching opera back in Russia, it’s always been a live orchestra, nothing digital,” said Mr. Skiyanskiy.

Because of the ‘flawless’ production, they both thought the music of Shen Yun was recorded.

“We actually didn’t realize it was live music until the intermission time. I just thought it was imported, but then we saw there is an actual orchestra—wow!” she said.

Mr. Skiyanskiy was amazed by the company’s patented method of integrating a 3D animated backdrop with the stage performance.

“I really was impressed by the synchronicity of the digital art with the dancers,” he said. “I was looking for a flaw and I couldn’t find it. It was like a perfectly synchronized move going through the screen. It was amazing!”

Since Shen Yun’s inception in 2006, its mission has been to revive Chinese traditional culture. Shen Yun says its performance this year demonstrates “China before communism.”

In addition to myths and legends, Shen Yun also presents story-based dances depicting the persecution of Falun Dafa, also called Falun Gong, a meditation and spiritual discipline based on the principles of truthfulness, compassion, and tolerance.

Having grown up in Russia, Ms. Estyunina said that she understands the brutality of communism.

“I remember the Soviet Union so I can relate. My grandparents told me a lot of stories, so I could definitely relate,” she said.

The dance piece depicting the state-orchestrated forced organ harvesting from Falun Dafa prisoners of conscience in China (part of the CCP’s persecution campaign), “was probably the one which touched me the most,” said Ms. Estyunina.

“My motto is peace and love, that’s like the base of life … so we are trying to be our best,” she said, “Unfortunately, people kind of forget about it. And I’m super happy that [Shen Yun] … share it with such a huge audience.”