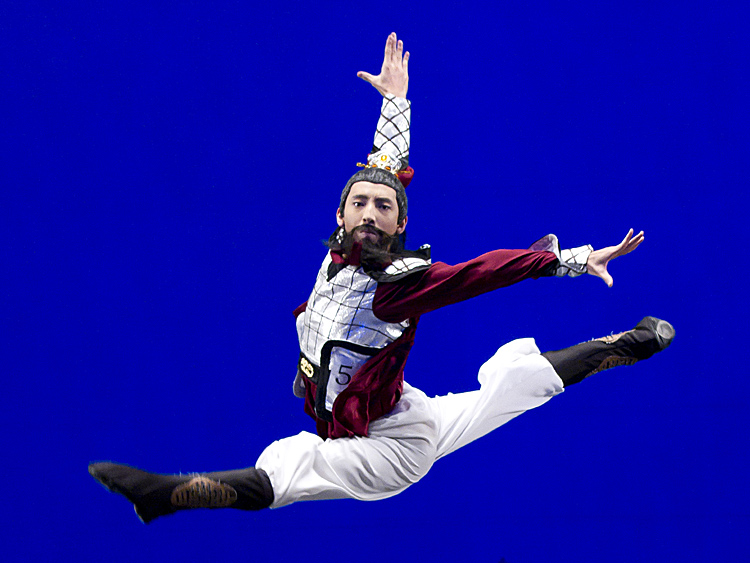 BY Christine Lin TIMEDecember 12, 2013 PRINT
Mr. Bojian Li is is a three-time consecutive gold winner (2008-2010) of the NTD Television’s International Classical Chinese Dance Competition. If such accolades are not impressive enough, he is also a principal dancer performing in practicum with Shen Yun Performing Arts, as well as a teacher’s aide.

In 2007, the Canadian, originally from Xinjiang, China, joined Fei Tian Academy of the Arts to study classical Chinese dance. After passing rigorous examinations, he was selected to perform in practicum with Shen Yun Performing Arts.

“As a principal dancer, I have a lot of pressure on stage,” Mr. Li said. “I have to always be at my best. I must be present emotionally and spiritually to be able to not only affect the audience but also bring up the emotions of the dancers around me.”

Being a role model to other dancers is no small responsibility. On top of the many hours of practice that Mr. Li must complete daily, he also helps teach in some of the classes at Fei Tian.

“It’s a different experience to help out in classes,” he said. “As a dancer you have to be very emotional in performing, but as a teacher’s aide you have to be very logical, clear, and collected, and know how to quickly find the best way to do something.”

The fast-growing performance company is experiencing a meteoric rise in popularity. He says that the company’s mission is what drives him.

“Shen Yun has a noble mission and a grand vision. They help to promote traditional Chinese culture, and to bring to light the horrible things happening in China right now,” he said, referring to the decade-long torture of Falun Dafa practitioners at the hands of state police. During his travels with the performance, Mr. Li has deeply felt Shen Yun’s impact on audiences.

“It’s humbling to talk to people and see how touched they are by what we do,” he said. “Some people cry and tell us, ‘It’s so amazing—it changed my life,’ and it’s just so much positive emotion, so much praise, that I feel I must push myself even harder to meet their expectations.”

Having performed in practicum for Shen Yun in the past years, what stands out most to Mr. Li is his experience performing in Taiwan. “We’re always welcomed very enthusiastically. Performing in Taiwan brings us closer to our people. It’s poignant because right now we’re not allowed to perform in China.”

When Mr. Li is on stage, he often plays the role depicting a Falun Dafa practitioner who is persecuted for his faith, and ultimately triumphs in his righteousness and non-violence.

“Every time I perform such a piece, my first thought is that I want to help bring the truth out. We hear and read these stories and we get to know people who have been through the persecution themselves, so we get an idea of how much hardship they go through. I try to relive their experience on stage.”