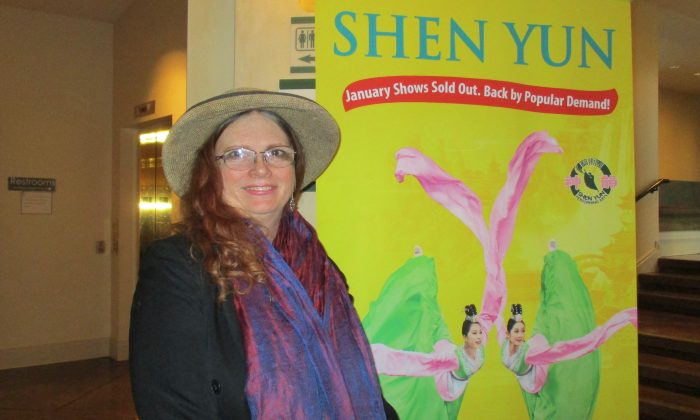 Artist Helen Cons said, "Thank you for showering me with all these blessings." She had just seen Shen Yun Performing Arts on Jan. 27, 2016, at the California Center for the Arts. (Marie-Paul Baxiu/Epoch Times)

ESCONDIDO, Calif.—After waiting all year, Helen Cons finally got to see Shen Yun Performing Arts on Jan. 27 at California Center for the Arts with her friend.

She could hardly contain her excitement: “I went to the show last year and was absolutely just so touched and amazed. … I am so overwhelmed. This is my second time watching it. I’ve been waiting all year to see it. It’s absolutely, incredibly beautiful.”

Being an artist, Ms. Cons was inspired by the beauty of Shen Yun: “I paint beautiful images of divine beings from heaven in beautiful settings just like what I just saw. I came here to drink in the beauty as deep as I could.

“Every year, it exceeds my expectations. Being inspired even more so with my artworks, I’ve filled my well. I took all that in, and I get to put it in my paintings.”

China was once known as the “Divine Land,” with the belief that its rich culture was a gift from the heavens. However, this culture has been almost lost under decades of communist rule in China.

New York-based Shen Yun, formed by a group of leading overseas artists in 2006, seeks to revive the divinely inspired culture through story-based dances and music.

Through approximately 20 vignettes, audiences are invited to take a journey through 5,000 years of Chinese civilization that includes myths, legends, and modern stories of courage, where “mortals and divine beings merge on stage as one,” according to Shen Yun’s website.

Ms. Cons was so moved by two story-based dances that are set in modern China, where adherents of Falun Gong, a spiritual meditation practice that teaches truthfulness, compassion, and tolerance, are persecuted for their beliefs.

“I could not stop crying. I felt so much compassion for the Chinese people and the terrible things they have been through,” she said.

Ms. Cons did not forget to share good things with her friends: “I also come to bring my friends and to share the message of compassion and forgiveness and love. The world needs this message so much.”

“The world is threatening to destroy itself through narrow sectarian differences and fighting, and Buddhism spreads the message of compassion and empathy, caring for people and treating each person as a divine being,” she explained. “The message that we all came from heaven is very beautiful and very true, and all religions of the world teach it. I can’t even begin to tell you how it touched my heart.”

Ms. Cons was delighted to learn that Shen Yun has four companies touring around the world: “The message is so beautiful and so deep. It really needs to be spread throughout the world, and what a better way to spread it. This whole thing is such a blessing.” She expressed gratitude to She Yun for showering her with “all these blessings.”

I was crying and laughing and having the most beautiful, exquisite, enjoyable time that I’ve had for the whole year.
— Helen Cons

She also had high praise for the performers: “There is so much beauty and so much professionalism. They’re some of the world’s best performers. They put everything they have into that. You can really feel it. … I was crying and laughing and having the most beautiful, exquisite, enjoyable time that I’ve had for the whole year.

“I’m completely blown away by the whole thing and the love that it took to put this thing together, “she said.

Ms. Cons was enthralled by the state-of-the-art graphics technology. Shen Yun’s digital-backdrop team creates vividly animated settings, extending the stage and transporting the audience to a world where heaven and earth are one.

“I felt like I died and went to heaven—literally. I’m not exaggerating. I was in heaven,” Ms. Cons said, expressing her feeling not only about the backdrops, but also about all aspects of Shen Yun’s performance.

“It was just overwhelming and so exquisite in every way. I could stand here and reel out all the adjectives: exquisite, touching, emotive, deep, empathetic, original, unusual, delightful, and funny.

“We’re all entertained on all levels. I just kept feeling energy going through my spine. It was so exciting. … I just feel so good about myself and good about the world and everybody. So I hope everybody can have that kind of experience when they come to see this show,” she said.

“I must say, if more artists and dancers and everyone, intellectuals and speakers, would come here and enjoy this, they would be vastly enriched and deeply enriched from the Chinese culture,” she added.

Ms. Cons reiterated her gratitude to the Shen Yun performers: “I just express my deep appreciation. We love you, we want you to come back, and we want you to keep bringing this exquisite show for us because it’s food. We love you, the Chinese culture, and thank you for coming. … Thank you so very much!”

“I’m just so happy and grateful that [Shen Yun] is being presented for so many people that really need to hear it and see it and enjoy it,” she added. “I hope everyone gets to see it. And I can’t wait for next year’s show.”