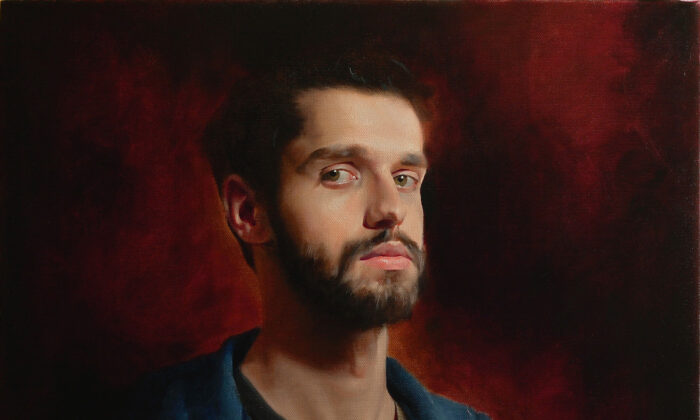 AUCKLAND, NEW ZEALAND—As he paints, David Owain Jones sometimes feels he’s trying to figure out exactly why he is so fascinated with figurative and representational painting. And why he’s so driven to paint year after year. Once he’s resolved that enigma, maybe he’ll stop painting, he laughs. Whether he’s joking is hard to tell.

What is clear is that Jones is constantly curious about art, and through self-study, the halls of traditional learning, and now through atelier teaching, he continues to reflect on what makes great figurative and representational art.

This fascination has enthralled him since childhood. He remembers borrowing art books from the family bookshelf and poring over the pages of old masters’ paintings from museums around the world. For Jones, it’s “an innate interest” that has “never really lessened.”

Before the age of smartphones, Jones spent a lot of time as a teenager researching art on the internet, which was an unusual way to do research at the time. There, he found people working in the entertainment industry—in film, video games, and book illustration—who were making all kinds of figurative artwork and making a good living from it.

“That was the first time it occurred to me that it was something I could do as an adult as opposed to something that you did and you grew out of, which is mostly how it had been presented to me,” he said.

Jones taught himself as much as he could to prepare for university training. Most of the study seemed to be by chance. He would stumble across a few pieces of advice on how to kick-start his learning process: certain books to read or artists to look at. The self-study proved invaluable.

Soon after he started taking an illustration course at Massey University of New Zealand’s Wellington campus, Jones realized it was different from what he had read online about traditional illustration. The course definitely leaned toward the American illustration tradition, studying the likes of Norman Rockwell. But Jones found that the course was conceptually focused. Art theory and art history were taught, but art practice was left for students to discover for themselves.

He explains that before going to the university, his self-study unveiled for him that American illustration is similar to the Renaissance art tradition, which focuses on a lot of visual education: learning how to effectively see as an artist and then correctly convey this scene in a picture. For example, students would learn how to create successful compositions and “how to create emotion through visual means rather than through literary allusion,” he said.

The lack of structured studio time in the course wasn’t what Jones expected, and he left after a short time, disappointed but not discouraged. He continued to teach himself and moved from commercial arts to a more fine arts approach in his artwork.

Years later, Jones returned to school believing a degree would be useful, and pursued a Design and Visual Arts degree at Auckland’s Unitec Institute of Technology. The visual arts component of the degree at Unitec is the school’s equivalent of a fine arts degree. Again, he felt that students were largely left to their own devices.

Staying True to Tradition and Himself

“There’s something beyond the verbal that was in there; that’s the most important thing for me,” he said. As such, he adds nondescript titles to his works and rarely adds descriptions, often to the amusement of his friends. He wants viewers to bypass their brains and simply experience his paintings by looking.

Jones’s self-portrait, from around 2011, seems to sum up his art. In the painting, he places his hand firmly on his chest in a gesture that shouts: “I am who I am.” Jones explains that it’s a gesture seen in the historical paintings he was studying at the time: from the late Renaissance, early Baroque, and Venetian painters such as Titian and Giorgione in particular.

His gesture is a strong statement, fitting for what he was experiencing. “I was quite insecure about doing the painting,” he said. No one he knew had an interest in traditional figurative art. That style of painting was “extremely out of place” compared to what his peers were painting.

Throughout his art education and conversations with contemporary artists, he came across a lot of assumptions that were being made about traditional artworks. Different bits of history were being grouped together that didn’t really belong together. He also felt that some of the authors on art theory, who were often quite famous critics or historical writers, “hadn’t really looked at the history of [traditional] painting that closely, or had looked quickly and made assumptions. And those assumptions were now being passed on to young artists as literal, … about a certain period of art.”

He therefore suggests that we educate ourselves on traditional art, and maybe spend more time looking rather than reading.

When Jones teaches, it forces him to stop and reflect further on what makes a painting great and why, rather than to just keep on producing paintings, which can sometimes happen as a professional artist.

As a teacher, he understands that each student needs to be met where they are in terms of skill and their learning expectations. “It’s really hard to teach,” he laughs. “You can’t always critique everybody to the standard you critique yourself as an experienced artist,” he said.

Jones believes anyone can draw, but not everyone can be a great artist. He explains, “Assuming you are interested, have patience, and some diligence, you can definitely learn, and probably to a reasonably high standard.”

In the past, Jones taught basic drawing, but now he’s devised more formal instruction. He teaches portrait painting during the week and a foundation in drawing class on the weekends. In the latter, he begins by teaching the basics: what materials to use and how to use them. Then students learn how to copy a master drawing, flatwork (a drawing of a relief or sculpture), and geometric 3D forms, for example. Once the basics are understood, figure drawing will be easier.

Often, Jones finds that new drawing and painting students underestimate how much knowledge and understanding is needed before they can effectively apply pencil to paper or paint to canvas. He’s also seen how some self-taught artists, or those who have only copied from photographs, struggle in the more advanced classes if they haven’t had a good foundation in the basic techniques and theoretical principles: for example, techniques like how to hold a pencil, how to blend something, or how to make different strokes; and theoretical principles like proportion or perspective, which come more from the mind rather than the hand.

Jones teaches his classes as part of the recently formed Auckland Atelier based at Takapuna Arts Supplies, the art shop and studio owned by U.S.-born couple Jim and Sandy Auckland.

Jim is an experienced illustrator and fine artist of some 40 years. He runs several long-standing untutored life drawing and painting workshops, although many students come for his “untutored” advice. Jim also saw the need for more structured support for artists, and over the past year or so, they created the Auckland Atelier.

The aim of the atelier is to offer that hands-on support that Jones couldn’t find: not only teaching “the fundamental principles of visual art” but also nurturing “a deep understanding of the craftsmanship and critical thinking central to traditional art practice,” according to the website.

As part of the atelier, Jones is trying to create what he couldn’t find as a teenager—a supportive teaching and mentoring community for figurative and representative artists. And now it looks like he has some like-minded artists to help him figure out just why he keeps on painting.

Jones ends with a sincere request: He encourages us to look at traditional painting with fresh eyes, to consider it more carefully, and without any preconceived notions.

To find out more about David Owain Jones, visit DavidOwainJones.com