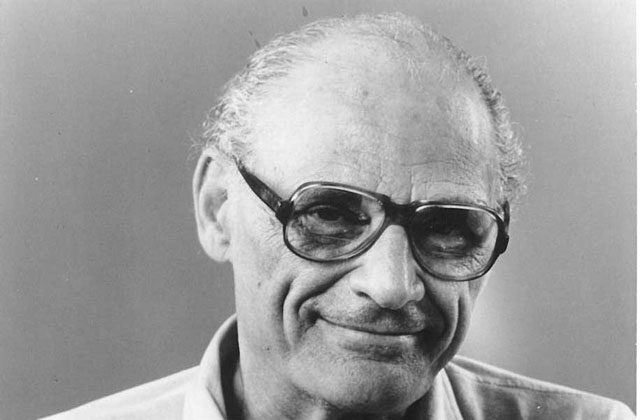 Robert Cooperman
Robert Cooperman is the founder of Stage Right Theatrics, a theater company dedicated to the preservation of the founders’ vision through the arts. Originally from Queens, New York, he now lives in Columbus, Ohio, where he earned his doctorate at The Ohio State University.
View profile
Follow
biggersmaller
Print

In February 1949, Arthur Miller’s essay “Tragedy and the Common Man” appeared in The New York Times, a mere two weeks after the premiere of his most acclaimed play, “Death of a Salesman.” Considered by some to be the justification for the “tragedy” of Willie Loman, the piece—which never mentions Loman or the play itself—nevertheless sets the foundation for a new examination of the genre of tragedy. It proposes, as its title indicates, that tragedy can no longer inhabit the realm of the royal, the warrior, or the god. Instead, argues Miller, tragedy is suitable for the common person who shares with the tragic heroes of old an existential striving to find “his rightful place in the world.”

Even after 72 years, “attention must be paid,” to use Miller’s famous line from “Death of a Salesman,” to an American playwright of Miller’s significance. Unfortunately, while his essay retains much of its rhetorical power, its message has been bastardized by our contemporary sensibilities, so much so that the tragedy Miller envisions is neutered to the point of losing its grandeur and permanence. When looked at from a Natural Theater perspective, one can see just how contemporary theater cannot support Miller’s treatment of tragedy (but the Natural Theater can!).

The Natural Theater is a movement that builds on the philosophy of our nation’s founding, in that all people are free to pursue their lives in accordance with the Natural Rights given to them by Nature’s God. Such pursuits inevitably lead to conflict. Translated for the theater, this means that characters of the Natural Theater encounter conflict not because they are victims of an unjust society, but because they have contributed to this conflict through their own actions (defined by reason, as the founders outlined). Ultimately, despite setbacks and suffering, the plays of the Natural Theater remain hopeful, forgiving, and redemptive. Human nature, therefore, becomes both the cause and the resolution of drama.

Miller’s salient point is that within the great masses of humanity, there are “those who act against the scheme of things that degrades them.” Miller offers two possibilities for the source of this degrading “scheme of things”: the psychological and the societal.

Neither possibility in its entirety suits Miller. “If all our miseries, our indignities, are born and bred within our minds, then all action, let alone the heroic action is obviously impossible,” he writes. One only need think of Don Quixote fighting windmills or the Emperor Jones seeing specters to see how ludicrous—and unheroic—their actions are.

Similarly Miller says, “If society alone is responsible for the cramping of our lives then the protagonist must needs be so pure and faultless as to force us to deny his validity as a character.” Here Miller recognizes the fact that human nature is imperfect. Such recognition is particularly acute in our modern age where the unspoiled heroes of old do not satisfy as much as seriously flawed commoners do.

So, Miller is looking to share the blame for the tragic character’s misfortunes between an inward assessment (psychological) and an outward evaluation (societal). Under normal circumstances, or at least more rational times, this would be a healthy approach. Now, however, our contemporary playwrights tend to create “tragic” characters with no ability to inspect their own complicity in their dire situations. I’ll get back to this later.

The Natural Theater does not support such a stance and denies the authenticity of characters who blame society for all their ills. Any character who does not examine, first and foremost, his or her own moral character cannot be a tragic character of Natural Theater. Thus, it stands to reason that the foundation of Miller’s argument—the wronged individual taking a stand against some force that attempts to destroy the character’s “sense of personal dignity” and “rightful position in his society”—can be significantly weakened by today’s culture of victimization, neutralizing tragedy regardless of the rank of the sufferer.

Tragic heroes of the past looked inward, found fault in what they saw, and made peace with it in order to set the world right. Hamlet, for example, is all about self-reflection and ultimately acceptance. (“But let it be. Horatio, I am dead.”) Oedipus, after learning of his fate, blinds himself and accepts his exile. Even poor Willie Loman comes to realize that his adultery is every bit a part of his downfall as is the impending menace of new technology and old age. All examined their moral character in much the way our founders expected each of us to pursue a moral life that would, in turn, allow us to govern ourselves.

Indeed, our country was founded on the belief that every human being has natural rights to pursue as the individual wishes, but always with the same goal of living a life of virtue and preserving our institutions for future generations.

Throughout the essay, Miller reminds us that the tragic character seeks a place or position within the universe, using the adjective “rightful” as a modifier. But what exactly does he mean by “rightful”?  Miller suggests it is “the disaster inherent in being torn away from our chosen image of what or who we are in this world” that constitutes rightfulness (emphasis added). Later he offers that the hero needs to realize himself or herself as “the only fixed star.” Therefore, “rightful” seems to imply some sort of personal sense of self-worth and fulfillment of individual dreams for success and happiness.

On the surface, this concept is in sync with the American experience, with its emphasis on individuals living life in a manner they see fit and without government interference. Once again, however, today’s world takes Miller’s concept of the “only fixed star” and alters it into a selfish trait devoid of any connection to a greater society or a greater significance.

Thus, we have characters adrift in a meaningless, hostile world that has somehow done them wrong. (The lovable tramps of playwright Samuel Beckett’s “Waiting for Godot” come to mind.) This leads to countless dramas featuring the common person in decidedly common—but not tragic—circumstances: failing to succeed in relationships, engaging in meaningless sexual encounters, drowning in addictions, lamenting their condition. Today, these characters are elevated to a state of prominence that flies in the face of what Miller had in mind for the tragic hero.

In a comment directly aimed at playwrights, Miller warns that “no tragedy can therefore come about when its author fears to question absolutely everything, when he regards any institution, habit or custom as being either everlasting, immutable or inevitable.”

Indeed, today’s playwrights do tend to question everything (as they should). But rather than merely question, today’s artists condemn the very immutable institutions that have sustained us for almost 250 years. The playwrights among us who question the everlasting qualities built into our nation’s conception—and seek to depose them—will believe that they are creating tragedy on par with that of the ancient Greeks and Shakespeare. Instead, what they tend to create are depressing, often horrific stories lacking any realistic understanding of the human condition, an understanding our founders mastered. The basic instincts of today’s artists have taken what Miller suggests to the extreme; thus, they cannot create the tragedies he anticipates as the outcome.

Miller also observes that “the plays we revere, century after century, are the tragedies.” He is right, of course, and American audiences, if they have any inkling of the principles of our founding (a proposition that becomes more and more doubtful given the state of education today), should immediately appreciate why the tragic heroes of yesterday still tug at our hearts even as we try to usurp their power with today’s antiheroic figures (the dissatisfied, the angry, the misfits). Deep down, we know that the ideals of individual responsibility, compassion, self-sacrifice, and humility are the traits we find most satisfying as Americans. These are precisely the traits we find in the tragic figures of antiquity and why yesterday speaks so loudly to us today.

One final point that Miller makes is that tragedy is a positive force whereby the “possibility of victory” exists. “In truth,” Miller argues, “tragedy implies more optimism in its author than does comedy, and that its final result ought to be the reinforcement of the onlooker’s brightest opinions of the human animal.”

The Natural Theater wholeheartedly embraces this idea. The sooner playwrights start writing tragedies where the impact of outside forces is balanced with honest introspection, the sooner we will once again have a theater of noble values, connected naturally to the American experience. And it won’t matter if the hero is a commoner or a king.

Robert Cooperman
Follow
Robert Cooperman is the founder of Stage Right Theatrics, a theater company dedicated to the preservation of the founders’ vision through the arts. Originally from Queens, New York, he now lives in Columbus, Ohio, where he earned his doctorate at The Ohio State University.