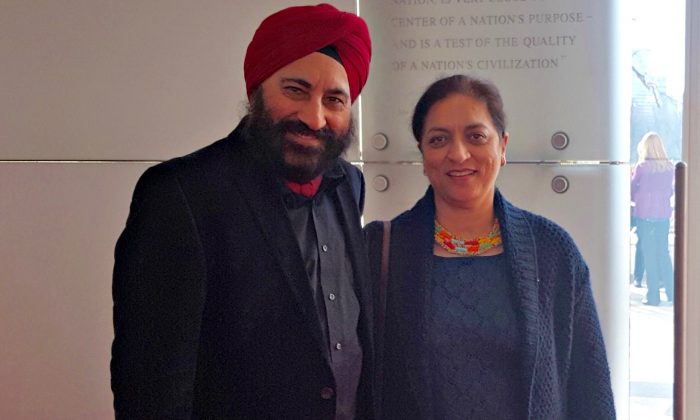 WASHINGTON, D.C.—Gurcharan Singh is traveling all over the world for his job as a contract manager at the World Bank.

He has been to China on business, but the Feb. 20 performance of Shen Yun performing arts at the Kennedy Center Opera House took him to a complete China. A China which resembles his own traditional and spiritual roots.

“Going to heaven and all, that’s the same thing we are spiritually talking about in India,” said Mr. Singh, who is a community leader for the Indian Sikh culture. “I will tell my community people to look at it. Because of my culture. It’s just reflected here.”

Mr. Singh’s wife Manjit, who owns and operates a Montessori school in Maryland, much agreed.

She pointed out similarities in her beliefs: “How life is so temporary and then we have to go back, go back to heaven, and if we don’t do the right thing then we’ll be reincarnated, all of that.”

Mrs. Singh also thought the scenes showing how traditional Chinese culture was treated in China today by the communist regime were well worth watching.

“We knew about all the atrocities happening there but to see it picturized here, in the dance, it was a good learning experience,” she said, noting that her husband doesn’t see that side of modern China on his business trips.

Some of Shen Yun’s dances show the struggle of practitioners of the spiritual discipline Falun Dafa in modern day China, like the dance “A Steadfast Heart.”

In the dance, an old man is persecuted because he practices the meditation exercise of Falun Dafa. But holding fast in his faith, there is divine intervention, and an ending with hope.

“It was a good learning experience,” Mrs. Singh said.