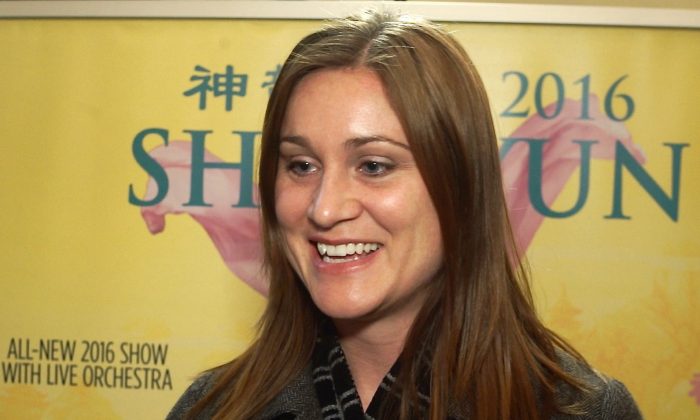 SALT LAKE CITY—Connecting colors to meanings is so widespread that it has created its own industry. Some combinations evoke happiness, peacefulness, tension, or other emotions, whether for biological, psychological, or conditioned reasons.

“I think there tends to be a lot of pessimism and negativity in our modern world. So this was a really wonderful, bright counterpoint to that,” Ms. Holtom said after seeing New York-based Shen Yun at the Janet Quinney Lawson Capitol Theatre in Salt Lake City on Dec. 29. “It was just very happy.”

With a graphic design background, she paid close attention to the color palette and analyzed the effects.

She noticed a lot of complementary color pairings in the costumes, more subdued colors in the bel canto solo vocalists’ performances, and monochromatic use of color in some cases, for a somber effect.

“It was an awesome performance. It was so exciting—every time the curtain would come up for another number, just seeing the colors,” she said.

Ms. Holtom said the color palette reflected a feeling that “was very lighthearted and hopeful.”

The hope she would take away from the performance was about the artists’ expression and coming together, she said.

“The colors really reflected the feel and the emotion and the happiness and the optimism. So I think it was really great. Very well done!” she said.

“What impresses me most is just the feeling that you have when you leave the theater,” Ms. Wangsgaard said. “It’s such an inspiring experience and really instills hope in young people to see the dedication and the devotion to their [Shen Yun artists’] craft and to their art.”

It’s a show for all ages.
— Heidi Wangsgaard

She said Shen Yun was filled with detail and “the standard of excellence”—a performance rarely seen and one for all ages.

“Each dance is so unique and so different, tells such a different story, that it’s really something that’s memorable, that you never forget,” Ms. Wangsgaard said. “Tonight’s performance was just breathtaking.”