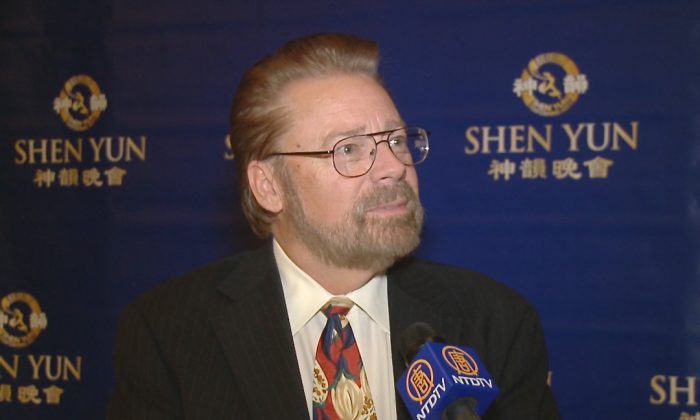 LAS VEGAS—Dennis Rusk, who practiced architecture for over 30 years and now is a designer, enjoys watching many Las Vegas performances.

However, he was especially delighted by world-renowned Shen Yun Performing Arts on Feb. 21 in Reynolds Hall at the Smith Center for the Performing Arts.

“It’s spectacular,” said Mr. Rusk. “The colors, the costumes, the choreography, all of it.”

Mr. Rusk has designed over 600 projects including custom homes, destination resorts, restaurants, and amusements parks. He is the author of the book Death of American Architecture.

New York-based Shen Yun’s website says, “In 2006, a group of leading classical Chinese artists came together in New York with one wish: to revive the true, divinely inspired culture of China and share it with the world.”

Mr. Rusk said he could feel the rich heritage of Chinese culture in Shen Yun. He said it was tragic that China’s true culture could have been so easily lost, but it was thrilling that it has been kept alive and shared with Shen Yun’s audience.

“Through the universal language of music and dance, Shen Yun weaves a wondrous tapestry of heavenly realms, ancient legends, and modern heroic tales, taking you on a journey through 5,000 years of Chinese culture,” says the website.

Mr. Rusk said he felt overwhelmed by the dedication of all of Shen Yun’s artists.

“The people that are involved in it, you can see their passion and how much they love what they are doing … it’s incredible,” he said.

“I think this would have a tremendous place here in Las Vegas as a permanent home,” he said. “I really do.”