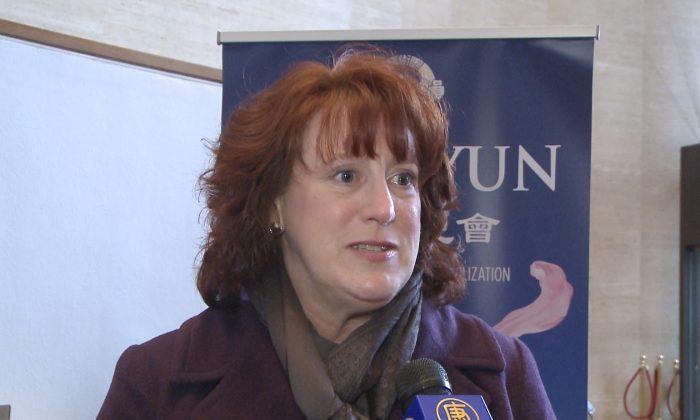 HOUSTON—”I was touched very deeply by the performance,” said Catherine Belan, an architect, builder, and planner, after seeing Shen Yun Performing Arts with her sister Jeanette Belan at the Jones Hall for the Performing Arts in Houston, Dec. 31.

Ms. Jeanette and Catherine Belan have always been lovers of the theater and Ms. Jeanette Belan thought her sister, having danced for over 20 years, would enjoy the performance.

Ms. Catherine Belan, who is the president of the East Montrose Civic Association and involved in planning in her city along with running her architectural firm, said things she was aware of superficially had just opened up for her after seeing Shen Yun.

Based in New York, Shen Yun was established by artists from around the world to revive 5,000 years of Chinese civilization. Under the current communist regime, China’s divinely inspired culture was nearly lost.

The stories Shen Yun tells through the universal languages of music and dance range from the inception of China’s first dynasty up to the modern day. The traditional Chinese values Shen Yun highlights are practiced by the spiritual group Falun Gong, as the emcees explained, a group which has been persecuted by the Chinese regime since 1999.

Ms. Belan said she had been aware of the persecution, but Shen Yun’s artistic telling of these stories showed her the cultural and historical significance “on a very deep level.”

“The stories, it opens my mind,” Ms. Belan said. “The dancing and the singing was just glorious, and I thoroughly enjoy the artistry and the work that goes behind” them.

Ms. Jeanette Belan had not known about the persecution or the extent to which the communist regime tried to destroy traditional Chinese culture. She was shocked and moved.

“[Shen Yun] is beautiful, and I encourage the Chinese people to continue to pass on the Chinese history and culture,” Ms. Jeanette Belan said. “We all grow based on our history, being enriched upon that, so I appreciate being able to see this.”