Architect and CEO: It Is a Shame That Shen Yun Cannot Perform in China 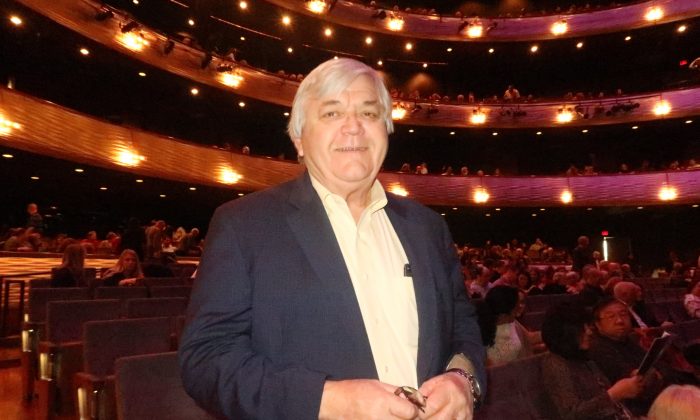 DALLAS—Tony Callaway is an architect, and president and CEO of Callaway Architecture. He came to see Shen Yun Performing Arts at the Dallas AT&T Performing Arts Center–Winspear Opera House on Jan. 20 with his wife and her sister.

“What I liked most is the choreography,” Callaway said. “It was absolutely fabulous, especially how totally in unison they are. Just the beautiful way they tell their story through their movements and motions, it’s just really phenomenal. And you can tell they’ve practiced a lot, because they are in perfect unison.”

Callaway was asked if as an architect he draws any inspiration from watching Shen Yun perform.

“Of course,” he said, “Any time I see something that beautiful, I’d like to put that in my buildings.”

“But I think the costumes and the colors were just spectacular within the backdrop, where the architectural pieces in the backdrop helped set the scene and the mood,” he said.

Callaway had a lasting impression of “Mongolian Spirit,” a Shen Yun vignette that showcases the spirit and life of Mongolian horsemen.

“I just thought it was very powerful,” he said. “It was powerful and active and just beautifully done.”

Shen Yun Performing Arts is headquartered in New York and was formed in 2006 by artists who wanted to revive the ancient traditional Chinese culture. When communists in China seized power in 1949, they overturned the 5,000 years of culture. The authentic history of Chinese culture, its spirituality, and its values continue to be suppressed in China by the communist party.

“I think obviously, for 5,000 years, that’s a long time to have a culture,” said Callaway, commending the artists for their mission.

Callaway said it’s a shame Shen Yun is not allowed to bring their production to China.

“That’s certain,” he added. “Because obviously your heritage is what defines who you are and where you come from, and so you always go back to the basics whenever you get off track.”

Frank Smith and Kitty St. Claire were also at the performance.

Frank Smith is a painter who explores themes in his work such as the search for the divine across faiths. His wife, Kitty St. Claire, is a librarian.

“I didn’t know what to expect. I expected something very exciting,” said Smith.

“I am extremely impressed. All the way from the dancers who are extremely well trained and beautiful, but the costumes are beautiful, the technology on the screen, behind, and melding it all together is very much like a story teller would tell.  It’s almost being there with a Buddhist monk telling you all these tales, so I’m very impressed.”

Kitty St. Claire said, “I love it. I’ve never seen anything like this before.”

“I love the expressions,” she said. “And I like the humor in it, because I didn’t expect that at all. I also like the technology included in it. That is beautiful to me. I have a hearing disability, but we are right down front, and the sounds are intense, and they go with expressions and what’s happening on the stage. So I absolutely love that too.”

“And I’m like my husband, I love the costumes, the colors, everything is just beautiful. The techniques and dancing styles. Beautiful.”

Smith recalled a piece that moved him, a story set in China today, named “Goodness in the Face of Evil,” and based on a true story.

“I was touched by the rendition of the young woman who was thrown in prison and tortured for her beliefs,” said Smith. “Because my understanding of the culture is that it has always been highly spiritual, highly in touch with the divine, and to see the reversal of that so graphically and so beautifully told was very touching for me.”

With reporting by Diane Gao, Amy Hu, and Carrie Gilkison.