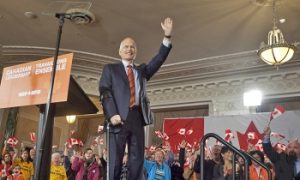 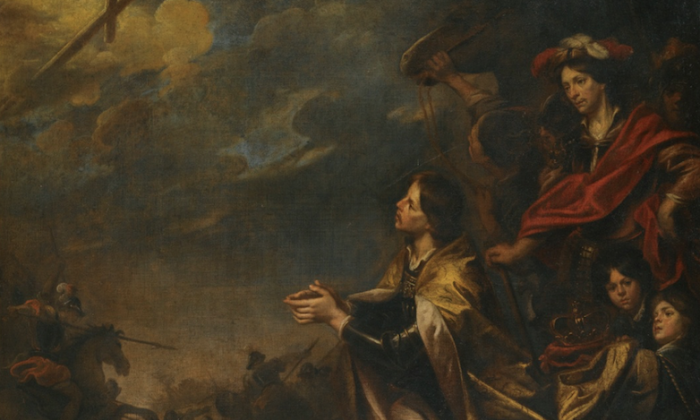 “The Emperor Constantine's Vision of the Cross Before the Battle of the Milvian Bridge,” attributed to Theodor Boeyermans. (Public Domain)
Literature

A Reading of ‘The Apparition’ by Herman Melville

(The Parthenon uplifted on its rock first challenging the view on the approach to Athens.)

Abrupt the supernatural Cross,
Vivid in startled air,
Smote the Emperor Constantine
And turned his soul’s allegiance there.

With other power appealing down,
Trophy of Adam’s best!
If cynic minds you scarce convert,
You try them, shake them, or molest.

Diogenes, that honest heart,
Lived ere your date began;
Thee had he seen, he might have swerved
In mood nor barked so much at Man.

Have you ever undergone a conversion experience? One where, in a sudden flash, you fundamentally changed your perspective? Such moments, which define our lives, are not easily forgotten.

In the first stanza of this poem, Herman Melville describes the conversion experience of the Roman Emperor Constantine. It is said that before a crucial battle he looked up to the sun and saw a cross of light above it. When victory came, he declared that his empire convert to Christianity, even though it had once burned Christians alive.

The first word of the poem, “abrupt,” brings home the sudden, unforeseen, almost calamitous nature of the revelation. It isn’t easy to be proved wrong. “Vivid in startled air,” the cross sounds like a huge exclamation point in the sky. This celestial sign smites or whacks Constantine over the head—like a slap from the Zen master that both stuns and enlightens the pupil.

In the second stanza, Melville turns his attention to the Parthenon, a temple built for the Greek goddess Athena. (Parthenon literally means “virgin’s home.”) Today it stands as a symbol of ancient Greece and by extension the development of art, philosophy, and democracy.

The Parthenon exemplifies a different “power” to the supernatural cross—the power of man. It is a “trophy” not of God’s might but “Adam’s best,” which refers to humanity as a whole. This biblical metaphor in a classical context unites the Cross and the Parthenon while also contrasting them. The Judeo-Christian and Greco-Roman can indeed be reconciled, as they have been in the strange hybrid creation known as Western civilization.

At the sight of the Parthenon, some would gasp in awe. “Cynic” minds, however, would guffaw at such grandeur. Look at those columns! They’re falling down! The original Cynics in Athens thought that man should live in accordance with nature, and thus they had little time for good manners. Cynicism, or the perception of there being a discrepancy between rhetoric and reality, is a useful and even necessary trait—cutting through hypocrisy with a robust common sense.

Yet the expectation that there must always be such a discrepancy, and that no one can be trusted, becomes in itself a hindrance to truth. It turns corrosive. In Melville’s view, the society of which the Parthenon is part doesn’t take kindly to being mocked and is prepared to “molest” or pick on those who would seek to demoralize it. Is this brutal or wise?

Now, if the Cross could convert Constantine, who could the Parthenon transform? Melville mentions Diogenes, the biggest and most entertaining Cynic of them all. Philosopher as performance artist and clown, Diogenes once lit a lamp in broad daylight and repeated, as he went about, “I am searching for a human being!” Plato declared that Diogenes was “a Socrates gone mad,” and, as if to prove the point, Diogenes took to living in a bathtub. For Melville, he had an “honest” heart because he rejected materialism to try to find what really matters.

Could the Parthenon have turned Diogenes, known as “The Dog,” into a kitten? Well, Melville has unfortunately got his history a little mixed-up here—Diogenes was alive and well when the Parthenon was built and certainly would have seen it. And there is no proof that he found it of any account whatsoever.

But does that undermine the poem? The reference to Diogenes’s moodiness and barking implies that by complaining so much, he became close to being a bully—blinded by his own self-righteous zeal. Indeed, we can often come across certain supercilious souls who spend their lives raging at others simply because they aren’t perfect. Is this high-minded or immature?

For Melville, the Parthenon is proof that some good did and still does exist in the heart and mind of man. In our grand designs, our skyscrapers and bridges, we find an abiding virtuous power. Yes, they are apparitions, in the sense that they make manifest the glory of the imagination. Their temporary nature only offsets the miracle that they ever stood at all. But they are a testament to the human spirit, and if we give them a second look, we might find our view of ourselves changed forever.