American Express Manager: Shen Yun ‘talked about the Creator and it did hit home for me’ 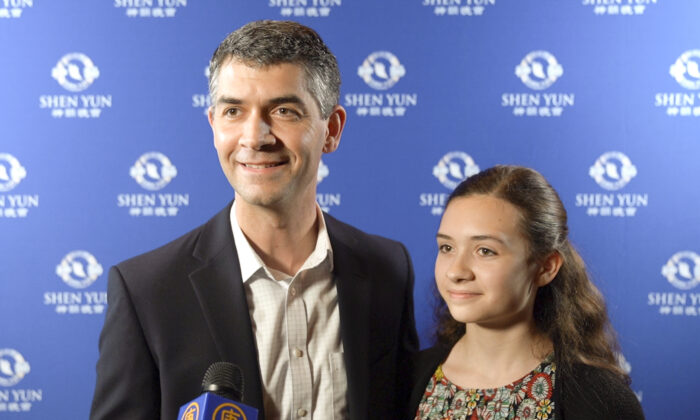 ATLANTA—Three generations of a family came to the Cobb Energy Performing Arts Centre this evening in Atlanta, Georgia, to see Shen Yun Performing Arts, inspired by the fact that one of the youngest among them studies dance. But according to Shawn Holland, American Express program manager and the father of the young dancer, they also greatly enjoyed the show’s stories of hope and redemption.

“It was wonderful. … It was amazing,” said Holland, who handles operational risk management for the credit card giant.

Holland’s daughter, Emma, is in seventh grade and studies ballet.

“It was amazing. I love the costumes, they were so pretty,” she said.

“I think in general [the meaning of the show] was very positive,” Holland said on Jan. 10, 2020. “I think hope was the central theme in the performance, in all the dances—redemption. It was encouraging.”

China was once known as “The Divine Land.” Shen Yun carries on that tradition by depicting the ancient legend of the Creator and his prophesied return to earth.

“I’m a Christian and so I saw a lot of parallels and similarities and putting your hope in something bigger than yourself, like God, the Creator. They talked about the Creator and it did hit home for me, it made sense to me, for sure,” Holland said.

“I want to go again next year,” Emma said, giving her stamp of approval, to the delight of her whole family.

David Harrison is a senior software engineer who attended that evening’s performance and found the experience fun, educational, and spiritual.

Each of Shen Yun’s short dance pieces impressed him and felt significant, adding credence to the idea that Shen Yun represents a pinnacle in today’s art world.

“I thought, well, they’re all important, because I love history, so it made me think about the fact that the Western world thinks they have the history, but China really does have the history, you know. I think it’d be fun to learn more about that actually,” he said.

While Shen Yun is restoring an ancient culture, something Harrison recognizes and thinks is a great idea, it isn’t a show that’s completely somber.

“I’m glad they put a little bit of comedy in there too. That made it fun, you know? Having some lighthearted pieces in there. It’s good,” Harrison said.

The traditional spirituality and divine recognition that resonated with the Holland family struck Harrison, too. He commented on the depiction of the Creator in Shen Yun’s performance as an ancient and universal concept, and something to look into.

“I’m very spiritual. I’m not a Christian, but I’m very spiritual, so I really like to dive into understanding different Asian spiritual concepts. … I think it’s an interesting concept that so long ago, we already had these kinds of ideas and the flood ideas, and you know, that they’re not unique to Christianity. I think there’s probably more to it, that there’s some truth in all of it somewhere way back,” he said.

With reporting by NTD Television, Sally Sun, and Brett Featherstone.