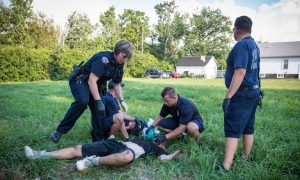 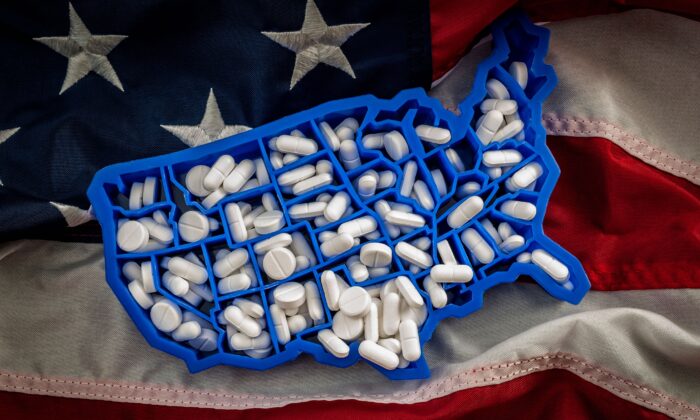 Communities across the country are grappling with the heartbreaking impact of an opioid crisis that could have been avoided. (Victor Moussa/Shutterstock)
Mind & Body

The 2019 BBC documentary, “Addicted: America’s Opioid Crisis,” explores the depth of the nation’s addiction to opioid painkillers and the role played by Purdue Pharma and other makers of the drug.

As noted in the film, opioids kill more people than any other drug on the market, and it’s the only type of drug that can condemn a person to a life of addiction after a single week of use.

According to the BBC, “1 in 8 American children live with a parent who suffers from a substance abuse disorder,” and “every 15 minutes, a baby in America is born suffering from opioid withdrawal.” Middle school-aged children interviewed also say they have easy access to drugs, should they want them.

Many now blame the drug companies that make these drugs and have falsely promoted them as safe and nonaddictive for patients of all kinds, including children.

That includes one of the former addicts followed in the film, who says he thinks the drug companies need to be held responsible for their role in creating this epidemic, and made to help pay for the solution.

One of the most prominent drug companies involved in the creation of this opioid addiction crisis is Purdue Pharma, the maker of OxyContin. At the end of October 2020, Purdue Pharma agreed to plead guilty to three federal criminal charges relating to its role in the opioid crisis, including violating a federal anti-kickback law, conspiracy to defraud the U.S. government and violating the Food, Drug and Cosmetic Act.

To settle the charges, Purdue is supposed to pay $8.3 billion in fines, forfeiture of past profits, and civil liability payments, but because it doesn’t have the cash, the company will instead be dissolved and its assets used to erect a “public benefit company” that both makes opioids and pays for addiction treatment.

While marijuana was long known as the gateway drug to other illicit drug use, that distinction now belongs to prescription opioids. According to data from the National Institute on Drug Abuse, prescription opioid use is a significant risk factor for subsequent heroin use.

Similarly, data from the University of Michigan shows just under 1 in 3 people (31.8 percent) who misused opioids during their high school years ended up using heroin by age 35.

When it comes to children and teens, a major source of opioids are dentists, who wrote a staggering 18.1 million prescriptions for opioids in 2017. Opioids are frequently prescribed when extracting wisdom teeth, even though there’s no evidence to support this strategy.

This is especially true if you see a biological dentist who knows what they are doing. Earlier this year I had a periapical abscess and had to have the tooth extracted. I saw one of the best dentists in Florida, Dr. Carl Litano, just south of Tampa. He used platelet rich plasma (PRP) at the extraction site and I had zero pain and no swelling without any medication. Afterward, no one could tell I had an extraction the previous day.

Children are also recklessly prescribed addictive opioids for minor surgical procedures. For example, insurance claims data from 2016 and 2017 reveal 60 percent of children between the ages of 1 and 18 with private insurance filled one or more opioid prescriptions after surgical tonsil removal.

Meanwhile, research shows opioids (including morphine, Vicodin, oxycodone, and fentanyl) fail to control moderate to severe pain any better than over-the-counter drugs such as acetaminophen, ibuprofen, and naproxen.

An Epidemic Caused by Greed

As noted in the film, this is an epidemic caused by greed within the medical system. Purdue Pharma was exceptionally skilled at marketing its product, cleverly disguising its advertisements as educational material. (The same can clearly be said about many other drug companies and their wares today.)

There can be no doubt that false advertising played a central role in the opioid epidemic, and for doctors, it highlights the importance of staying on top of published research rather than relying on drug company sales reps for their education.

The fraud has its roots in a short letter to the editor published in The New England Journal of Medicine in 1980. The letter—which was simply commenting on a cursory examination of patient files in a Boston hospital—stated that narcotic addiction in patients with no history of addiction was very rare.

Purdue built its marketing of OxyContin on this letter, for years falsely claiming that opioid addiction affects less than 1 percent of patients treated with the drugs. According to Purdue’s marketing material, featured in the film, “the most serious risk with opioids is respiratory depression.”

In reality, opioids have a very high rate of addiction and have not been proven effective for long-term use. A number of court cases in recent years have demonstrated how Purdue systematically misled doctors about OxyContin’s addictiveness to drive up sales.

As noted by David Powell, a senior economist at Rand, to produce the most lethal drug epidemic America has ever seen “you need a huge rise in opioid access, in a way that misuse is easy, but you also need demand to misuse the product.”

According to the documentary, Purdue made more than $1 billion a year from its sales of OxyContin. OxyContin’s success also quickly led to other drug companies mimicking Purdue’s tactics. Other companies being called to account include Allergan, Cephalon, Endo International, Egalet Corporation, Insys Therapeutics, Johnson & Johnson, Janssen Pharmaceuticals, Mallinckrodt plc, and Teva Pharmaceutical Industries.

In the final analysis, it’s clear that unconscionably deceitful marketing tactics have resulted in the death of hundreds of thousands of Americans; 46,802 Americans died from opioid overdoses in 2018 alone.  As of June 2017, opioids became the leading cause of death among Americans under the age of 50.

That said, the BBC also rightfully points out that we need stronger regulations and more effective checks and balances to prevent this kind of situation from happening again in the future. Merely making drug companies pay is not enough.

Purdue Lured in, Then Abandoned Doctors

Steven May, a former Purdue sales rep, also highlights yet another scandal. The company came up with a plan to help doctors better document their treatment of pain. Sales reps were taught how to instruct doctors to use these tools.

When those same doctors eventually got in trouble for overprescribing opioids, using Purdue’s tools, the company walked away and offered no support. Many doctors lost their medical licenses. Some ended up doing jail sentences and some committed suicide. “And they were doing exactly what [Purdue] taught us to teach them to do,” May says.

Adding insult to injury, when it became clear that people were dying in droves from opioid overdoses, Purdue launched an extensive damage-control operation that included the suggestion that those dying from opioids were already addicts, and that this wouldn’t happen to patients who were not already addicted to drugs. It was basically just a variation on the original lie.

According to lawsuits filed against Purdue, the company knew as early as the 1990s that OxyContin was one of the most abused drugs in the country, yet they did nothing to change their marketing and sales strategies.

Many of the opioid and heroin abusers featured in “Addicted” live on the streets. Desperation and despair are evident in all. Several investigations seeking to gain insight into the causes fueling the opioid epidemic have been conducted in recent years.

Among them is a 2019 study published in the Medical Care Research Review journal, which looked at the effects of state-level economic conditions—unemployment rates, median house prices, median household income, insurance coverage, and average hours of weekly work—on drug overdose deaths between 1999 and 2014. According to the authors:

“Our findings suggest that economic downturns that substantially reduce house prices such as the Great Recession can increase opioid-related deaths, suggesting that efforts to control access to such drugs should especially intensify during these periods.”

Similarly, an investigation published in the International Journal of Drug Policy in 2017 connected economic recessions and unemployment with rises in illegal drug use among adults. Seventeen of the 28 studies included in the review found that the psychological distress associated with economic recessions and unemployment was a significant factor:

A review of available research by scientists in the Netherlands and United Kingdom concluded: “The current evidence is in line with the hypothesis that drug use increases in times of recession because unemployment increases psychological distress which increases drug use. During times of recession, psychological support for those who lost their job and are vulnerable to drug use (relapse) is likely to be important.”

Another 2019 study published in Population Health reviewed the links between free trade and deaths from opioid use between 1999 and 2015, finding that “Job loss due to international trade is positively associated with opioid overdose mortality at the county level.” Overall, for each 1,000 people who lost their jobs due to international trade—commonly due to factory shutdowns—there was a 2.7 percent increase in opioid-related deaths.

Abuse-related trauma is also linked to unemployment and financial stress, and that too can increase your risk of drug use and addiction. As noted in The Atlantic, when the coal mining industry in northeastern Pennsylvania collapsed, leaving many locals without job prospects, alcohol use increased, as did child abuse.

Many of these traumatized children, in turn, sought relief from the turmoil and ended up becoming addicted to opioids. All of this is particularly pertinent today, as many parts of the U.S. have been shut down for extended periods of time over fears of COVID-19.

Not being allowed to work, being forced to stay at home for weeks or months on end, maintaining an unnatural distance even to your loved ones and not being able to see people’s faces when out in public—all of these things can contribute to fear, anxiety and, ultimately, despair that fuels addiction. Indeed, reports warn that substance abuse is on the rise as a result of pandemic measures, as is domestic violence.

It’s vitally important to realize that opioids are extremely addictive drugs that are not meant for long-term use for nonfatal conditions. If you’ve been on an opioid for more than two months, or if you find yourself taking a higher dosage, or taking the drug more often, you may already be addicted. Resources where you can find help include the following. You can also learn more in the article “How to Wean Off Opioids” on Mercola.com

I also urge you to listen to my interview with Dr. Sarah Zielsdorf. She explains how low-dose naltrexone (LDN), used in microdoses, can help you combat opioid addiction and aid in your recovery.

Using microdoses of 0.001 milligrams (1 microgram), long-term users of opioids who have developed a tolerance to the drug are able to, over time, lower their opioid dose and avoid withdrawal symptoms as the LDN makes the opioid more effective.

For opioid dependence, the typical starting dose is 1 microgram twice a day, which will allow them to lower their opioid dose by about 60 percent. When the opioid is taken for pain, the LDN must be taken four to six hours apart from the opioid in order to not displace the opioid’s effects.

Many types of pain can be treated entirely without drugs. Recommendations by Harvard Medical School and the British National Health Service include the following:

You can find more detailed information about most of these techniques in “13 Mind-Body Techniques That Can Help Ease Pain and Depression” on Mercola.com.

Additional approaches include helpful supplements and dietary changes. These can be used separately or in combination with the strategies listed above to control both acute and chronic pain.

Dr. Joseph Mercola is the founder of Mercola.com. An osteopathic physician, best-selling author, and recipient of multiple awards in the field of natural health, his primary vision is to change the modern health paradigm by providing people with a valuable resource to help them take control of their health. This article was originally published on Mercola.com, visit for article sources.