Actress: Shen Yun ‘Reminded me that humans are vessels of divinity’ 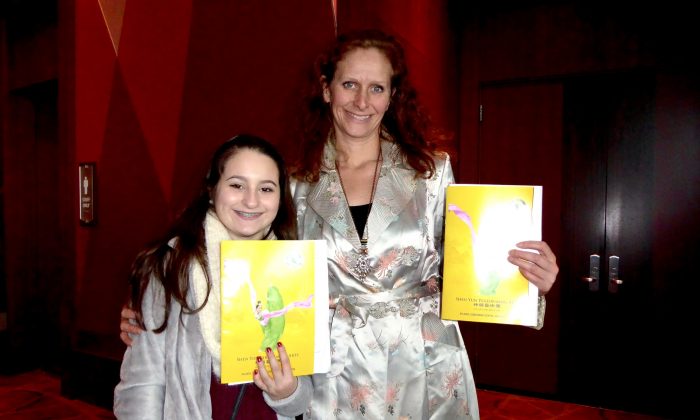 ATLANTA—Traditionally, artists believed art was to celebrate the divine and nurture goodness. In ancient China, artists cultivated virtue, as do the performers of Shen Yun Performing Arts, who seek to follow in this tradition and bring the divinely inspired Chinese culture to the world.

As an actress, Andrea Marino seeks to do the same. Seeing New York-based Shen Yun on stage, she said “I just felt like it reminded me that humans are vessels of divinity.” Among Ms. Marino’s accomplishments, she has five television acting credits.

On Jan. 16, Ms. Marino saw the matinee performance with her niece at the Cobb Energy Performing Arts Centre in Atlanta.

She was reminded of a higher power, a greater purpose, and what it means to be an artist: to cultivate yourself and your skills in order to deliver a beautiful message to the world.

According to Shen Yun, art is meant to uplift and inspire. Ms. Marino agreed.

“I feel that humans are filled with a force greater than ourselves, and we’re lucky to be here on Earth for a time where we do something with that, to help uplift all of us here together,” Ms. Marino said.

“Everybody has an individual purpose, and I feel like fulfilling that purpose uplifts the entirety of the planet, like flowers do with their colors, we each have our own beautiful thing that we add.”

She spoke of how the dancers’ virtuosity came through in their incredible “articulation of movement” and synchronicity.

Virtuosity requires devotion and effort, and if we settle for mediocrity then we forget that we are divine beings.
— Andrea Marino

The performance was moving emotionally, and so Ms. Marino could sense the artists had put in incredible effort, that they had trained their bodies and voices in order to communicate the message of their art. It was not something to be underestimated, she said.

“It’s a really difficult thing to do, and they did it with a grace and fluidity and eloquence that allowed us all to receive the message and feel like something beautiful and magical was washing over us, while we also simultaneously got a clear message as well,” Ms. Marino said.

That message was summed up by Ms. Marino as the belief in a Creator, peace and compassion, and uplifting morality.