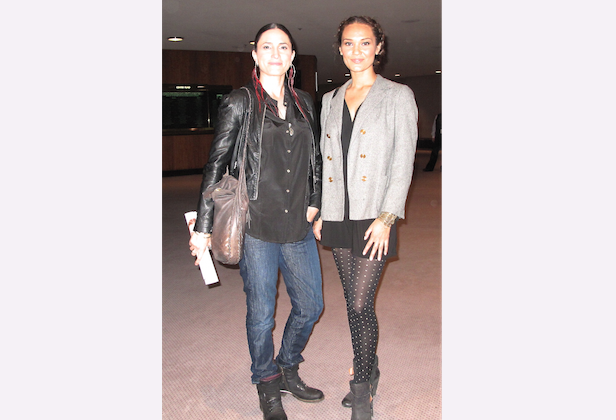 Brooke Ashe (L) and Anastacia McPherson at the Segerstrom Center for the Arts, on March 11. (Yaning Liu/Epoch Times)

COSTA MESA, Calif.—On a Tuesday night of March 11, Segerstrom Center for the Arts was fully packed with enthusiasts watching the world-renowned Shen Yun Performing Arts New York Company kick off its first of 17 performances in the Greater Los Angeles and Santa Barbara.

Anastacia McPherson, an actress who has appeared in several television series and commercials, came to see Shen Yun with her friend, Brooke Ashe, because “I definitely wanted to see the dance, and the music and the history behind it.”

“It was absolutely beautiful! I’ve never seen anything like it! And it did bring me to tears at one point,” said Ms. McPherson after watching the performance. I was very moved.”

Ms. Ashe is an artist, studios set construction manager, poet, filmmaker. She described, “It’s like a culture night [with] the opera, the orchestra and dance, history, and acting as well. And it definitely leaves a sense of delight inside. It’s a positive story, historical reference. And I think that’s great!”

Based in New York, Shen Yun, an independent and nonprofit organization, was established in 2006 by artists from around the world with the mission of reviving China’s divinely inspired traditional Chinese culture that had nearly been completely destroyed by the current regime in China over the last several decades.

According to the Shen Yun website, “For 5,000 years divine culture flourished in the land of China. Humanity’s treasure was nearly lost, but through breathtaking music and dance, New York-based Shen Yun is bringing back this glorious culture.”

Having a background in dance, Ms. McPherson was very impressed with the dancers’ flexibility and facial expressions, and had high praise for classical Chinese dance. She said, “It’s some of the most graceful movement I’ve ever seen!”

At the core of a Shen Yun performance is Chinese dance, which is “known for its incredible flips and spins, and its gentle elegance, it is one of the most rigorous and expressive art forms in the world.”

But even more impressive for Ms. McPherson was the precision of the dancers, “The synchronicity is impeccable! You really don’t see that a lot in that kind of synchronicity between the dancers. The discipline! It’s like it’s one unit. The formations, it’s moving as one. And I thought that, even when they jumped into screen, that whole element of the media, it was timed so well. Unbelievably well!” She marveled, “There was no mistake!”

“It was astounding! Actually the drums, the power, the stories, the beauty and grace. It was just absolutely beautiful,” she marveled at the performance. “It’s very cool!”

Some of the pieces touch on modern China, particularly the spiritual devastation that has taken place at the hands of the current Chinese regime, which has actively undermined and destroyed religious and spiritual institutions.

Ms. McPherson was moved, and brought to tears when watching The Steadfast Lotus story–dance, which depicts the ongoing persecution of people who practice Falun Dafa, a spiritual meditation discipline based on truth, compassion, and tolerance. The persecution was instigated by the Chinese communist regime in 1999 and continues to this day.

“The sacred lotus dance, the little girl with her mother. It was very moving! And I think it was just, the story and knowing the history behind it, he gave a nice premise of that religion can’t be practiced … It’s just very moving and beautiful!” she said.

Ms. Ashe added, “I really enjoy the power of the women, and the beauty of the men. I like being able to see the beauty in the men in the way that they move, and I like the strength in the women. And I like in her battle for her teacher, that she came back so strong, and then she went in her meditation practice, and she reached enlightenment and brought enlightenment to everybody. Like that was a lot of strength in that wisdom. So I really like that element.”

“It’s because it completely aligns with certain aspects of my life, or things that I’ve been through. And it just brought up emotions,” Ms. McPherson further explained. “I think that’s why I was so moved.”

Another notable feature of Shen Yun is its use of rich, animated digital backdrops to add context and immerse the viewers for each dance. The scenes might feature Mongolian plateaus or heavenly kingdoms.

Building sets for studios, Ms. Ashe had much appreciation of Shen Yun digital backdrops, the costumes and the color combination. “That actually stood out a lot,” she explained. “They’re pretty bright, but the amount of color combinations that they have, the beauty how the color combinations on the backdrop in their costumes, it really had a lot of life. Like a presence inside the whole area. Not just the stage but they are so bright they kind of come into you. So I really love a lot of the lotus, the pink lotus, when they had the silks and the props that they had. I really thought those were beautiful. I loved the toad costume. That was amazing, that was really a nice element to see there.”

Other features of the performance including vocal soloists who use bel canto technique while maintaining Chinese pronunciation, and a stirring erhu solo enchanted Ms. McPherson. She said, “The music, the singers. The women that played the instrument sounds sort of like a violin. It’s a string … it was just like diving into ancient China for a little while.”

Ms. Ashe concluded, “I’m glad we came the first day that’s its out here. To get as many people as we can to come back and see it. Yes, we thought there was an encore. We didn’t’ want to leave yet.”

“If you want all of your senses stimulated, go see the show!” Ms. McPherson said. “It’s everything!”