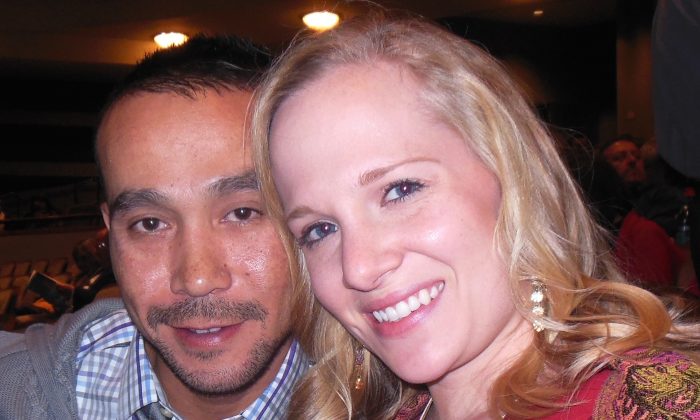 “The backdrops are beautiful, and the costumes, and the dancers are really polished. They are together. Everything is uniform, and [they are] really talented,” she said. “It is … very poised. It is just great.”

Mrs. Wright is a musical theater actress who also teaches singing and acting. She attended Shen Yun with her husband Thomas, a pastor at Homeless Ministries.

Mr. Wright added, “It is incredible, absolutely fantastic; we love it.”

As an actress Mrs. Wright appreciated the expression of the dancers. “The dancers are doing a great job, performing and giving us the atmosphere of the performance and the dance and the meaning behind it,” she said.

“They are absolutely skilled. Every one of the dancers is incredibly skilled. The tightness, the unity between everybody’s dancing and just how fluid all the movements are … and the way that everybody is moving,” Mr. Wright said, “That’s what I mean by incredible. It’s not every day you get to see people performing at this type of level. It is great.”

Mrs. Wright appreciated how the costumes blended and contrasted with the state of the art digital backdrop.

Shen Yun is based in New York and according to their website “Every costume in a Shen Yun performance is presented with brilliant colors, displaying a splendid spectacle—from the Tang Dynasty’s “Raiment of Rainbows and Feathers” to imperial dragon robes, phoenix coronets, and cloud capes; from the civil official’s headdress and robes to the warrior’s helmet and armor; and from the traditional rightward cross-collared Han clothing to the ethnic attire of the Manchurian, Tibetan, Dai, Mongol, and Uyghur ethnic groups.”

Mr. Wright said he really liked how seamless the interaction between the human dancer and digital animation was. “It was seamless. I love the whole concept, just the vision behind why the individual with the painter brush was able to paint the thing that he did. And then they were actually able to manifest it. It just really showed a purity of heart. And I just love that. I love the artistic side of that.”

Shen Yun brings ancient tales and modern stories to life on stage through music and dance as well as incorporating folk and ethnic dance. It incorporates an orchestra combining traditional Chinese instruments with a Western Symphony orchestra and solo singing performances.

The Wrights were touched by the soprano. Mrs. Wright said, “It is beautiful! Really clear, bright tone, and really expressive, and really telling the story. And it also helps to have the lyrics up there, so we know what she is singing about.”

Mr. Wright felt there was an interplay between good and evil and felt he could relate it to his religious beliefs. “We are both Christians; we believe in Jesus … looking at the similarity between dark and light … the description of darkness and evil, and … the colors, and what is expressed up there, it is very similar to the way that is portrayed in our beliefs. That really resonated with me and then especially the way it was sung, and the way it was presented … the piano, absolutely gorgeous.”

Mrs. Wright felt Shen Yun had a message of hope for the people of the world. “I think the hope, and then just the honest conviction of that here is the darkness that we see, but darkness is not going to win, and the light is coming in. I received the message to choose which side you are going to be on —lightness or darkness.”

“China was once known as the land of the divine. Unfortunately over its past 60 years of rule, the communist regime has treated traditional Chinese values—centered on the idea of harmony between heaven and earth—as a threat to its existence. And in its systematic campaigns like the Cultural Revolution, it has uprooted traditional beliefs and destroyed ancient treasures—bringing traditional 5,000 years of civilization to the brink of extinction,” according to the website.

Mrs. Wright thought it was “remarkable and courageous” that the performers were sharing stories that could not be seen in China, “so that they can tell a complete story of Chinese culture and Chinese history.”

Mr. Wright said, ” I think that is extremely significant to be able to present that in an environment where the actors and actresses are free to do it, in a way that keeps it authentic and real, especially not being able to do that at home, and being able to do that here. I say it is awesome.”

He felt he had a better understanding of the arts after seeing Shen Yun and that he had a thirst for more.