Actress Profoundly Inspired by Shen Yun: ‘A great day for the arts’ 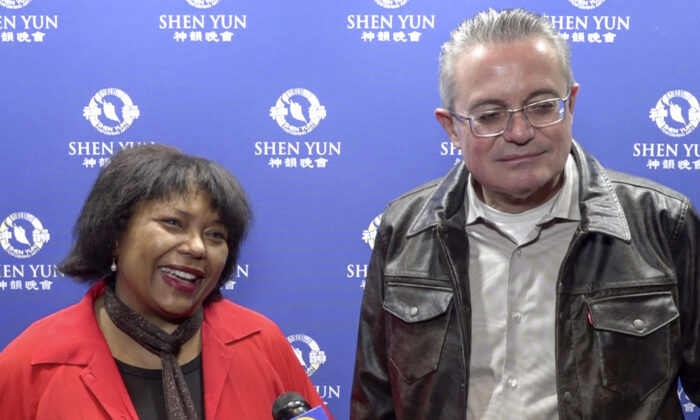 Wanda Sanchez and Thomas Keienburg enjoyed Shen Yun at the Jones Hall for the Performing Arts in Houston, on Dec. 30, 2019. (NTD Television)

HOUSTON—The state of Texas has long been a meeting place for different cultures and people. Tonight, in the spirit of that tradition, at a performance of New York-based Shen Yun Performing Arts, one Houston theatergoer saw an unforgettable coming-together of audience members and artists from across the globe.

“It’s the first time I’m seeing the show here tonight, and it was really fascinating. I liked the elegant performance, the live music of the orchestra was really impressive. And the artistic compassion of the dancers was really captivating,” said Thomas Keienburg, a businessman who represents a company from Europe.

Keienburg attended New York-based Shen Yun with his wife Wanda Sanchez, Puerto Rico-born actress and activist, at the Jones Hall for the Performing Arts on Dec. 30, 2019.

“Like him, today was my first time at this beautiful performance. It had all sorts of emotion and impact combined in one. The marriage of the music and the costumes, the way [the singers] perform the beautiful words … the poetry, the songs—captivating,” Sanchez said.

Shen Yun has set out to revive China’s 5,000 years of rich traditions and storied culture. The artists have chosen performing arts as the vehicle to restore this ancient civilization to the world.

Keienburg said he enjoyed this aspect of the show very much.

“It was very impressive, such an old culture, which is a few thousand years old, and here we are in the United States, which has just a history of a little bit more than 200 years. So when you compare those cultures with each other, it’s quite a difference. The origin of China, of Asia, and the roots and how it all evolved over the centuries and dynasties,” Keienburg said.

“Unfortunately, I do not know much about [Chinese culture],” she continued, “But I do see the news. I see the uprise that’s going on in Hong Kong and I say, ‘more power to the Chinese people.’ They are a wonderful culture, and old culture, something that we can all learn from, and [it has] so much to offer. And I just think that we are in a better place because of it.”

Shen Yun depicts also stories about the Chinese communist regime’s ongoing persecution of spiritual practitioners and their peaceful attempt to overcome the brutality. The couple was touched by these pieces.

“I was impacted by the persecution of [people] wanting to practice meditation. And that was also heartfelt to me because it’s real and it’s happening, as it was said by the narrators. So I believe this show offers a great deal of knowledge of the world that we don’t know and see, and yet beauty of the world that we know and see, so thank you very much for this wonderful moment,” she said, wanting her thanks to be passed to the performers.

Lastly, the actress said that her heart was deeply moved by Shen Yun’s lyrics, with their acknowledgment of a divine presence.

“They impact me in a way that it’s poetic and calming, and soothing in a way that inspires me to want to write poetry, dance, and play with colors. Beautiful colors!” Sanchez said.

Would the couple recommend Shen Yun to their friends?

“Oh, my goodness. I will recommend it to the world. It is just an amazing show to watch. It is a walk into history, into the old, the new, the marriage, the inspiration that it offers; the connection to beauty in music and sound. And the visual arts. Absolutely,” Sanchez said.

Keienburg added, “I would definitely recommend it to my friends and co-workers. And I think that they should also see the show. It’s so delightful.”

“I love the visual arts. I love music. And today was another great day for the arts,” Sanchez said.