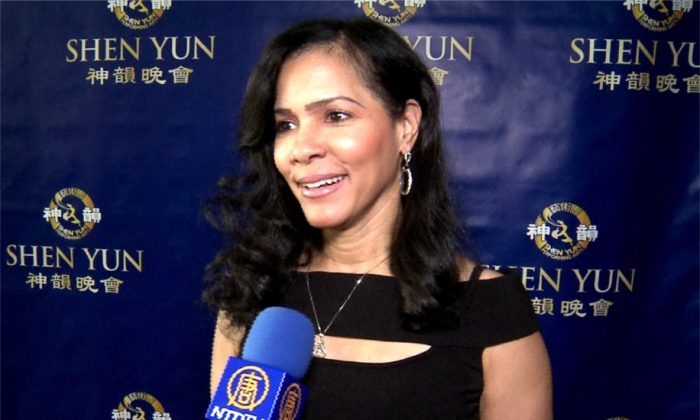 Ms. Blizzard is an actress and model. She has appeared on prime time television, feature films, and daytime soaps, such as the Jamie Foxx show, Days of Our Lives, Deep Space Nine, and had a supporting role in the sport drama Love and Basketball.

“I like everything about the show,” she said. “I loved the beginning for the opera. When told the story, I almost cried in the end. Everyone must have followed their own truth, I believe I like that. And [it] needs to be told more often.”

The Shen Yun website describes the origins of the company: “In 2006, a group of leading classical Chinese artists came together in New York with one wish: to revive the true, divinely inspired culture of China and share it with the world.”

“For 5,000 years divine culture flourished in the land of China. Humanity’s treasure was nearly lost, but through breathtaking music and dance, Shen Yun is bringing back this glorious culture,” explains the website.

New York-based Shen Yun is an independent, non-profit organization has quickly become an international sensation, with four companies simultaneously touring around the world.

Ms. Blizzard had high praise for Shen Yun dancers, “I like the beautiful women. They’re just so beautiful and stunning and delicate and gentle, and just beautiful. Really enjoyed it. Loved it.”

With a background in belly dancing, as well as improvisational and modern dancing, Ms. Blizzard was very much impressed by the classical Chinese dance. “The dancers’ skills are impeccable. You can’t get finer than that. That is the best profession. They are the best, I’ve never seen so many backflips and touching the toes, always pointed,” she said. “Just beautiful, up in the air, and they fly so high. Beautiful. I loved it.”

“Classical Chinese dance has its own training in basic skills, physical expression and postures, leaps, flips, spins and other difficult tumbling techniques, forming an extensive and independent dance system,” explains the website.

Music is an important component of Shen Yun, with each dance supported by the Shen Yun Orchestra. The orchestra is unique in that it combines Chinese instruments with a Western-style symphonic orchestra and thus, produces the sound described by the website, “The sound produced is uniquely pleasing to the ear. The ensemble at once expresses both the grandeur of a Western orchestra and the distinct senses of China’s 5,000-year-old civilization.”

Having such an enjoyable time at the Shen Yun performance, Ms. Blizzard did not forget her friends. She said thoughtfully, “I really feel bad now once I tell them how good this show was. They’re going wish they had come see the show. It was beautiful. I’m so glad I came.”

“They really missed on a good show. It’s a beautiful show, I think anyone should participate and get a glimpse what it’s really about,” she continued.

“I would tell them they’re going to miss out on a lifetime. It was a lifetime show.”